We had a couple of mild days in January, but for the fact that the wind was blowing really hard.  Annoyingly hard.  I wanted to look for glass so I went to Buttermilk Bay Beach hoping that I'd find something that was actually worn down, but it was almost all fresh.  This is the cruel irony about that beach:  It's full of glass.  It's all over the place.  But because it doesn't get any wave action, except for the high and low tides, the glass will never ever wear down, at least not in this lifetime.  I found a few pieces that were scratched, and for the most part none of these edges were sharp enough to cut me so that's why I took them home.  There's a large chunk of some kind of crockery that's brown on one side and white on the other. I also found a very rusty spoon but I don't think it can be saved.  Those yellowish shards on the right are textured. 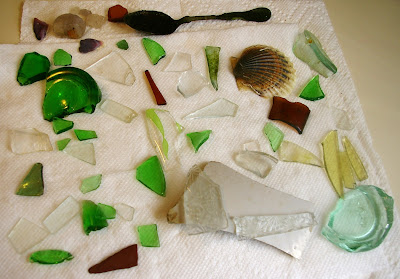 So are two of the white pieces. 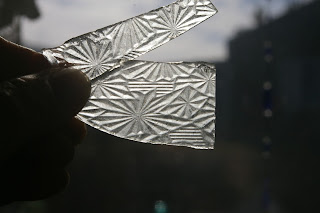