The beautiful Golden Gate Bridge. I commuted over it for 4 years when I lived in Marin (to the North) and worked in San Francisco, and I never stopped noticing it. Here are some pictures I shot of the Bridge.

This first one was taken from the Marin Headlands. Our apartment was in the Richmond District, very close to the Bridge and the Ocean. We could clearly hear the fog horns at our place, and it always felt so comforting. We felt safe, wrapped in the shroud of fog, all snug in our apartment, with the various horns singing out - first the resonant one on the Bridge, then 2 short higher pitched blasts from the Marin side, and when there were extremely foggy conditions, a very loud, deep bass fog horn from Mile Rock (located one mile outside the Gate). We felt so isolated from the rest of the world, as if San Francisco was an island, especially in our quiet neighborhood. You could go out to the little store around the corner at night and see the fog blowing up Geary Boulevard in the street lights.

One lazy Sunday afternoon we heard the fog horns start up, and we jumped in the car and raced over the Bridge to the Marin Headlands and we weren't disappointed!! 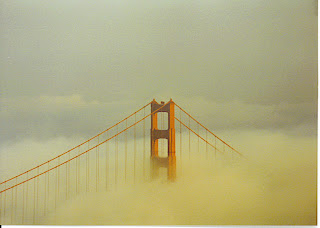 This is another semi-foggy day, and I shot this from Fort Point on the San Francisco side, under the Bridge. 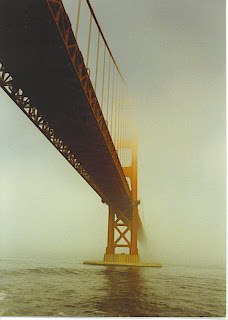 Here's a black and white, also taken from Fort Point, of the Bridge structure. 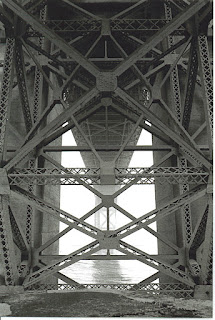 Another black & white of the Bridge soaring above Fort Point. 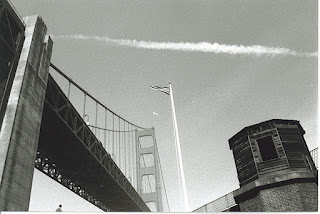 And this one I posted in December, of sunrise on Christmas Day 1991 or 1992, taken from the Marin Headlands. 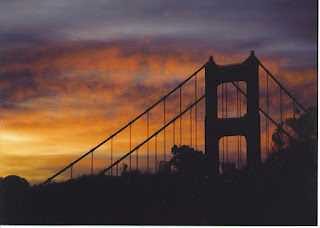