The Way Back Room

A month or so ago, I posted photos of our den. This is the room next to the den, and for lack of a better name for it, we dubbed it "the way back room". It's very cluttered with bits of memorabilia and brick-a-brack that we've collected over the years. We like to collect bits of pop culture, and you can tell a lot about our interests from looking at all the stuff in this room. I'm not sure but I think if you click on the picture, it might make it bigger on your screen. 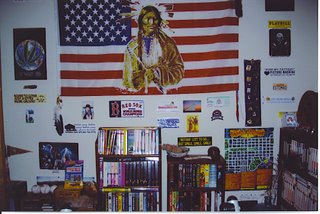 Note the metal handlebars of the gazzelle machine that never gets used. 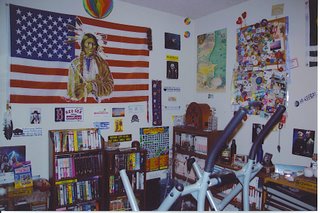 That's a map of Narnia in the top left corner of the wall, above the 1930's looking radio. 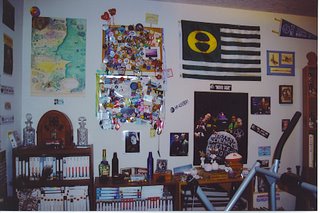 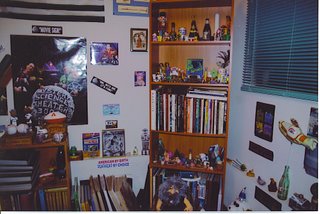 There's the gang from Lost in Space, one of my all time favourite TV shows. Don West was such a dreamboat! Yes, Val, that's a Yellow Submarine. The local record store gave them away with the purchase of Yellow Sub when it was re-released a few years ago. Somehow it has survived for about 8 years without popping or deflating. 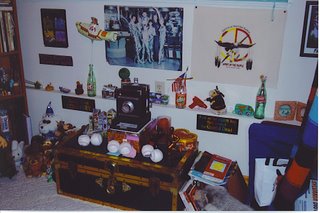 You can't really see it well, but Sagan (aka Destructo Dog) got ahold of our Jerry Garcia doll and bent poor Jerry's wire glasses hopelessly out of shape!! 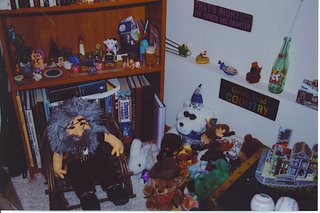 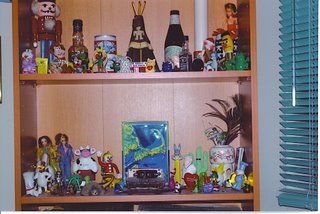 We got the autographed baseballs from the Tacoma Rainiers games we went to in the past. I don't remember who half of them are, but a couple of them have made it to the big leagues, like Bobby Madritsch. The big black thing in the center is a paper camera that I built. Brian got me the kit many Christmases ago and one year I decided to finally tackle it. It took from January to about April to finish the kit; once I got going, it actually became pretty easy to build. The camera is made entirely of heavy stock paper, except for the fabric bellows. Even the gears inside at the back, are paper. I haven't tried it, but the camera supposedly works. There's a pinhole in the lens, and you remove the lens cap to expose the film, then put the cap back on, and wind the gears to line up the next frame of film. Maybe someday I'll try it. 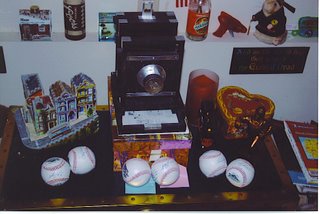 Oh, and by the way, since I know someone's gonna inquire, no, I don't dust this room very often at all.
Posted by JoJo at 11:50 PM