A sense of foreboding.... 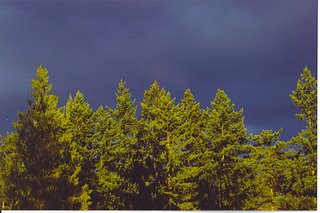 We get some wild weather up here, as you all know. In the fall and spring, we will have sudden downpours, followed by bright sunlight. The cycle repeats itself all day long - the sky gets black and rain comes down in torrents, then 15 minutes later, the sun is out. It causes havoc on the highways when everyone is blinded by the reflection of the rain on the pavement, so they slam on their brakes and massive pile-ups occur. This was shot off my back deck, facing east, in the late afternoon, in September. We'd just had a downpour and the rain was moving east into Buckley and Enumclaw. Although it did not happen on this day, I also have similar photos of the dark sky over the brightly lit trees with a rainbow arcing across the sky.
One year we were watching the annual Daffodil Parade in April, which was live from Puyallup, just about 7 miles west of us. It would rain there, but be sunny here. Then it would be rainy here and sunny there, and that cycle kept up for most of the parade, so we were able to figure out when our next downpour would arrive, based on the weather we were seeing on TV from Puyallup.
Posted by JoJo at 3:12 PM