Welcome to Tacoma, Washington, USA - "The City of Destiny". Tacoma has a lot of potential, and it definitely has it's gritty areas. Overall, the downtown part is undergoing a slow, but steady, transformation from boarded up old buildings to pricey condos, trendy restaurants, shops, bars, nightclubs and museums. So far, so good.
Here's one of The Sounder trains that take commuters to Seattle a few times a day during the week. They also run it up to Seattle for Mariners games on Sundays in the summer, hence the logo on the front. We took it to a game once in 2001 and it was a blast! 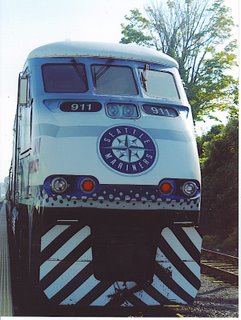 Freighthouse Square is my new fave place to shop. There's a huge antique store, called Katy's Antiques. She's really cool; originally from Alaska. My fave store in the world, Crescent Moon, is there too. I could spend thousands of dollars on the celestial/Wicca/dragon/faerie/crystal themed books, clothes, art, objects, etc. There's a huge food court, lots of other little shops and art galleries. 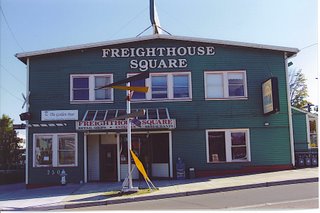 Thea Foss Waterway, looking west towards Commencement Bay. Lots of condos are being built along on the water. 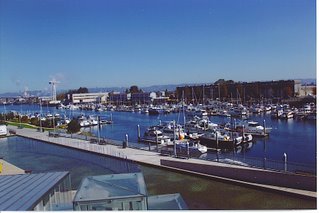 Looking east: Thea Foss Bridge, Tacoma Dome most prominent features. The cloud in the background on the left of the bridge is one of Mt. Rainier's lenticular clouds. Sometimes it sits right on top of the mountain like a hat, and sometimes it drifts a little ways away. People have actually mistaken them for UFO's. 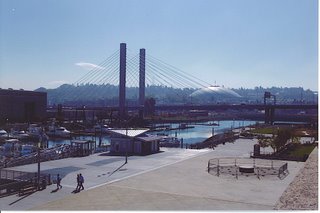 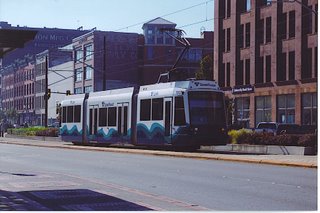 This is Union Station, shot from the back. It was a train station in its heyday, but it now serves as the US Courthouse in downtown Tacoma. It is filled with beautiful glass art created by Dale Chihuly and his students. 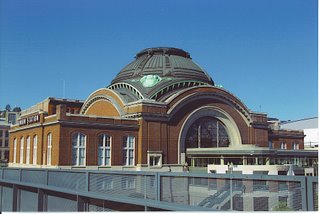