We've been living up here for over 7 years now and I've never seen it rain this hard, for this long. It's a very wet, but very warm storm, known on the West Coast as "The Pineapple Express" because it's warm air coming directly from Hawaii which brings a ton of rain. It's about 60 degrees out and extremely humid....At least my hair is curly today!!

I'm hoping that I have no problems getting home on River Road, which is actually a levee along the Puyallup River that keeps the water from flooding the farms on the other side. I wonder if I can use my car seat as a personal floatation device? 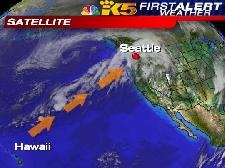 Here's a Doppler radar picture from yesterday afternoon of the storms coming in from the South and North. I don't know why it shows a "rain shadow" on the coast and interior Olympic Mountains (below Forks) because it's been pouring down rain there as well. 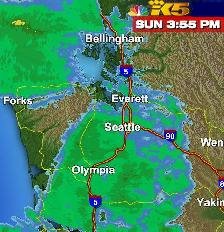 I got the next few pictures from our local news websites. This one shows an accident near Shelton, which is pretty far from where I live. Mud and debris over the road are responsible for this one. 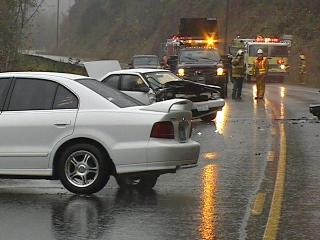 Here's a killer "rooster tail" taken on a local road in Pierce County, where I live. Earlier today, my boss, coworker and I were watching the drivers slam into the huge puddles in front of our building - we saw some great splashes! 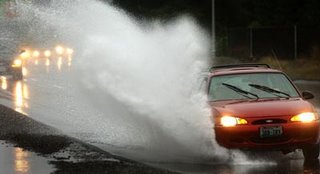 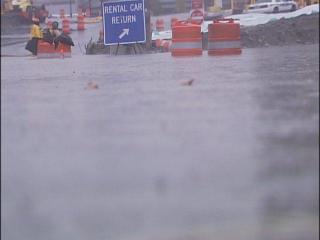