My friend CiCi passed away from breast cancer this week.  She was from a large Sandwich family with deep roots, therefore, she knew everyone and I am not exaggerating.  She went to high school with my cousin Skipper, who died in 1966.  Although she knew my family, I first met her in the summer of 1983 when I began to work as a chambermaid at the Dan'l Webster Inn.  At that time, the Catania Family was one of the biggest employers in town so I worked with a lot of my schoolmates, in housekeeping and also waitstaff, gift shop & kitchen help.  CiCi had already been working in housekeeping for years and took me under her wing.  CiCi was always friendly and chipper and laughing.  Heart of gold.  I LOVED being paired with her to clean rooms.  We chatted and gossiped, joked and laughed and put the radio on and sang and sometimes danced around.  Sometimes I called her 'Cecil'. The work always got done and we had a great time doing it.


This is a picture taken New Years Day of 1985.  CiCi is on the far left, Patty who worked with us (was off that day but stopped by to say Hi), Me and Clair. 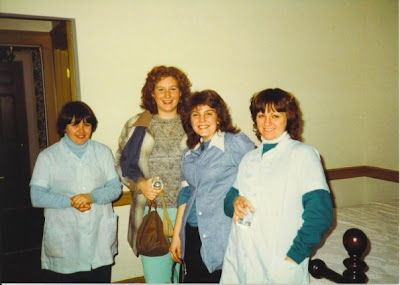 I have no idea why I had my camera with me that day, but a guest took this photo of us.  Patty and Clair are holding water glasses.  CiCi's and mine were on the bureau.  You see, some rather jolly guests, two couples in their 50s or 60s, invited us all in for a New Years toast.  We, of course protested.  We were just there to bring them fresh towels.  Plus drinking on the job?  We again said, 'thank you no, we really can't...' but they insisted.  We looked at each other, shrugged and accepted.  Well, the Inn was packed with people checking out or still partying from the night before.  We were slammed with rooms to clean and tidy, and everyone was checking out late.  I don't even know if we had time to stop for a real lunch break, so we were starved.  Hot & sweaty and dying of thirst.  The guest poured our waterglasses full, we clinked, said Happy New Year.....and guzzled. I was so parched and it went down real easy. We thanked them and went back to our cleaning.  The four of us swore we'd never tell.  Clair went on to finish her rooms and Patty left.

Not 10 minutes later, we were buzzed off our asses.  CiCi and I were trying to make a bed in one of the suites and laughing so hard.  I can still see her doubled over, head on the bed, shoulders shaking.  Her laugh was infectious anyway, so I'm just howling too.  We'd shut the room door almost all the way but we were loud.  The head of housekeeping came in...a diminutive man named John who was pretty nice.  He asked, 'What the heck's going on in here?  What's so funny? Why are you two laughing so hard?'  They could hear us in the lobby.  But even John started laughing b/c she & I were so hysterical.  I started to say, 'we were just telling jokes...' when CiCi blurts out, 'OH MY GOD JOHN WE'RE SO DRUNK!'  So much for our "We take this to our graves" pact!!!  John blinked and looked at me and said, 'What?'  CiCi is still laughing so hard that tears are rolling down her face and because she's laughing, I can't stop either.  I tried to gain composure and managed to get out that guests had insisted on having us in for a New Years toast and given us 'just a little champagne', and b/c we were so thirsty we drank it too fast and it hit us a bit b/c we were so hungry.  She's still too out of control to add anything to the story thank god, like 'it was a full waterglass'.  John, fortunately, was in good humour and said, 'Well....OK....but don't let that happen again OK?  And keep it down will ya?'  It's my fave memory of CiCi.  I have a feeling I would have been sacked on the spot had I not been with CiCi.

CiCi was the can-do person at the DW & she was fiercely loyal to that place.  Anything that was asked of her, she did.  And did well.  The Catanias treated her extremely well too (they treated all of us well - I loved my years there.  All of us did), as they valued her as an employee, even finding easier things for her to do when she had problems with her knees in later years.  I had mentioned one summer that I wished I could pick up more hours somehow, and she told me that every Monday morning, she got to work 2 hours early to polish all the good silver champagne buckets and pieces, and she'd see if I could join her.  Next thing I know, I'm asked if I want to work with her early on Mondays too.  It was nice to be at the Inn when it was so early and quiet, chatting while we polished.

My final summer at the DW was 1985.  I was going into my senior year at Emerson and it was going to be a busy one.  I decided that I probably wouldn't be able to work there on my vacations anymore, and upon graduation the following spring, I'd be looking for work in my field.  The gals in housekeeping/laundry decided to have a little going away party for me at the end of my last day.  Here's a group pic from that day - Wendy, CiCi, Clair & Cathy, with Bernadine in the background doing bunny ears. 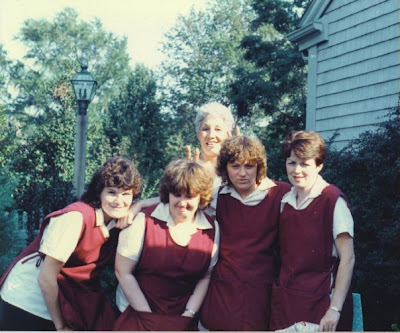 I ran into her a few times in the late 80s at the grocery store.  And once when I visited from California in the 90s, my parents & I went to the DW to eat and I saw her in the lobby.  I was so happy to give her a big hug and catch up a little.

A couple of years ago, I found out she had breast cancer but she was in treatment.  It's so survivable these days that I thought for sure she'd be OK.  In the spring of 2011 when I would talk to Russell by phone, sometimes he was at the Legion and CiCi was there playing Bingo.  One day I said to him, tell her I said Hi! He did and I heard her voice loud and clear, 'Hello Joanne'.  She had a very distinctive voice and laugh.  She was 4'11"...might've been a little shorter, but she was a dynamo, ball of enthusiastic energy.  She raised 2 great kids and remained on such excellent terms with her ex husband that his new wife became CiCi's best friend, CiCi was a second mom to their kids and they even vacationed together sometimes.  Everyone knows her, everyone loves her.  Family was so important to her and she adored all of her many, many nieces and nephews.  Everyone was family to her come to think of it.


The last time I saw her was when I first moved back in 2011, at Stop & Shop with Russell.  She recognized him of course, but I wasn't sure who it was because she was so sick at the time and it had taken its toll on her - but this woman was so short that it could only be one person.  As soon as she said, 'Hello Russell!!', I immediately knew who it was.  Big hugs all around...she was so positive, brushing off her health issues, 'I'm OK I'm fine'.  But she wasn't.  She fought long and hard the last couple of years.  I was at a birthday party on Sunday and was told that her death was now down to a number of hours....a day or two if she was lucky.  She got 3 days.

This is the way I will always remember CiCi, with that high wattage grin and heart of gold.  She leaves behind a son, daughter, grandchildren, her mom, sisters, brothers, scores of cousins, nieces, nephews and friends. 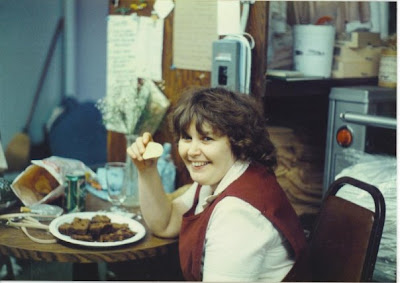