I was absolutely crushed that a spring craft fair at the Legion was canceled due to a scheduling conflict.  Lots of people rent that place on weekends for various and sundry reasons like wedding receptions.  It was supposed to be on March 23rd.  I am still really shy about selling myself to people and am grateful that Marsha was gonna do it with me again.  What I look forward to the most is seeing so many friends.  I felt a little bit cut adrift after that because I'd been making stuff like these votive cups.  Piecing together small glass chips on a round surface is way, way easier than working with large chunks on a square one. 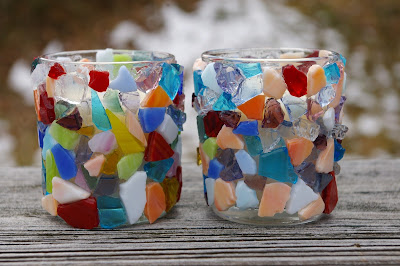 Since all the candle votive stuff was still out on the table, I decided to keep decorating them even though the show was canceled.  The ribbon weave was a MAJOR pain in the butt and this is yet another 'never again'.  The results look cool but it was very time consuming and difficult to keep the ribbon taught enough to cover the metal posts, as well as straight.  That one has a separate glass votive cup that fits inside, therefore there is no fire danger. 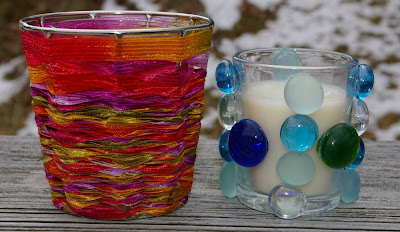 Blinged up my eyeglass case the other day, too.  Can't believe I didn't think to do that before.  "The obvious was hidden".

I also saw a project idea to make a Golden Snitch (from Harry Potter of course).  I found a smallish ball that I had, which was already pre-glittered.  I kind of wish that the ball was more gold than copper but it still looks cool.  The wings are made from bent wire with tissue paper glued over it, then glittered.  I used E6000 to glue them to the ball.

I hope that the show is rescheduled for a date in April or May.  Till then... 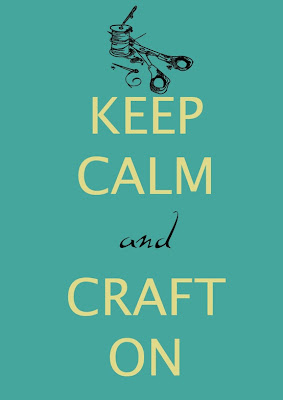