This red lampshade has been sitting around for quite awhile along with the beads purchased to make the fringe for it.  I think I bought the shade at Victoria Sells antique shop in Puyallup, nearly 10 years ago.  I thought I should probably stitch the fringe on, in an effort to finish up these works in progress.  The math to create this design was really challenging, but somehow I made it come out right.  There were over 160 loops.  Doesn't sound like a lot till you start stitching each strand.  I got about 7 strands in and abandoned it.  But then I decided to just push through, so I worked like gangbusters and got it done in 3 days. 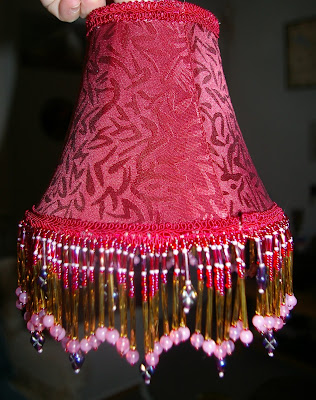 Placed on top of another lamp for photo purposes (I didn't do the white fringe; the lamp was purchased that way). 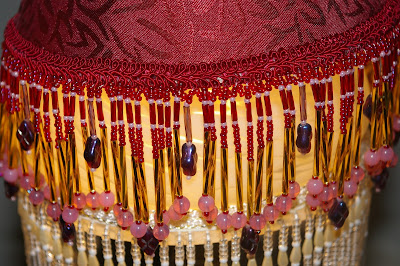 The next one was a rather large frame that I thought I was going to wrap in seed beads.  Wrong.  I remember when I started this project, eons ago. It took 2 hours just to get the seed beads onto the wire.  It would take a lifetime to finish so it was abandoned till I unpacked it to try another Pinterest project.  The premise was to tie fabric strips onto the shade posts.  This is the picture I saw and it looked sooooo easy. 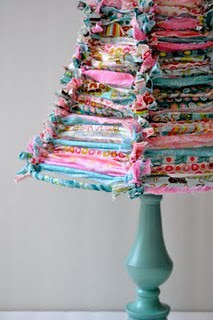 Sorry for the bad photo but this was just a nightmare.  I cut the strips but they all frayed leaving tiny threads all over.  I had trouble knotting them too.  I worked on it over the weekend and again one morning with slow and bad results. 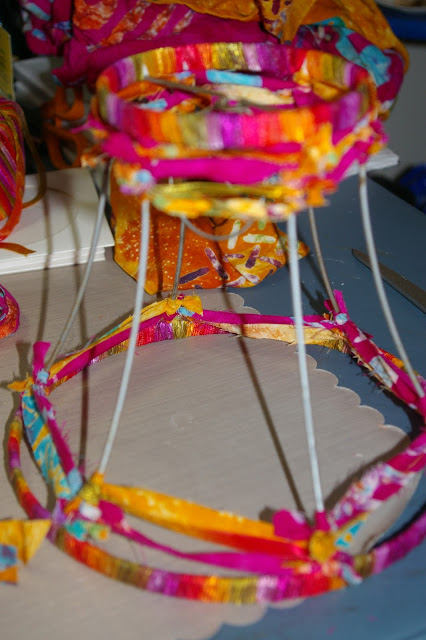 Then I thought I'd just wrap the frame in the same coloured ribbon I'd used to cover the upper and lower round parts.  I put mod podge on the posts and it worked perfectly till I got to the part where it starts to flare.  The ribbon refused to stay.  What a frickin mess I made unwinding it all to start over yet again. I was also making another marble thing at the same time. 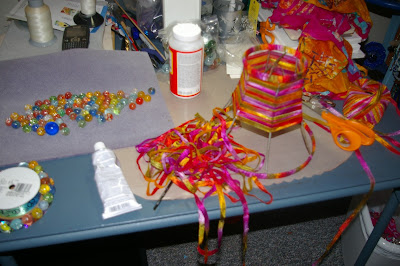 Since the mod podge didn't work, I got out the Terrifically Tacky Tape and put that on the posts instead.  Finally the ribbon adhered without sliding up.  Liz cracked me up when she commented, 'Vivid' on the pic on Facebook.  What can I say, I like it loud.  ;-D 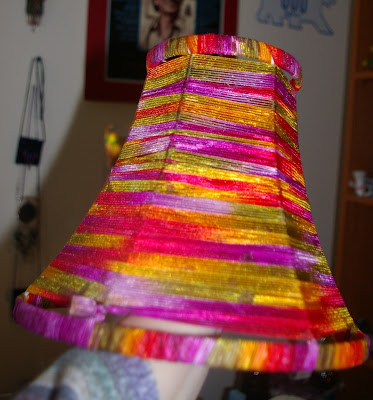 This is a clip-on-the-bulb shade.  I have no idea if this ribbon will melt or catch fire.  It never really occurred to me that it would be an issue, but I realize now it is.  Perhaps this is just a decorative and not a functional lamp shade. 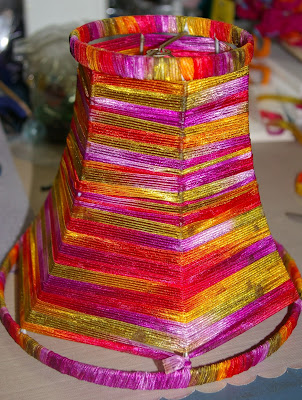