A Traitor to My Gender?

Not sure if any of my overseas readers have heard about the latest flap (read: sexual harassment claim) over a Hispanic reporter, Inez Sainz, who was doing a sports report for Azteca TV in Mexico, and alleged acts of harassment by the New York Jets.

First of all, the woman is a former Miss Universe contestant, so you know she's hot. Second, I believe that Mexicans and/or Hispanics, don't view skimpy or tight clothing the way prudish Americans do. Clearly nothing comes between Ms. Sainz and her Calvins. She says that this is considered appropriate attire for a Mexican TV reporter. Sure, in Mexico. Not so much for America. Nevertheless, she was covered, it's just that everything was extremely skin tight. 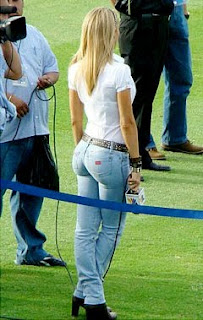 Fortunately, she has the figure to get away with this look. 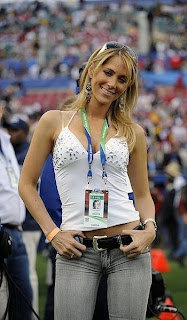 But the NY Jets players, being the stupid idiot neanderthal MEN that they are, not only ogled her on the sidelines, they threw footballs in her direction so that they could run by her. How old are these guys? 14?? Then she went into the locker room to do an interview. Can you see where this is going? Crude and suggestive comments were made to her. Now she is claiming she felt sexually harassed by that incident, and the NFL is looking into it.
This brings up the age old question of whether female sports reporters belong in men's locker rooms. There is no easy answer to that. There are plenty of women who enjoy sports, like myself, and many who have pursued that interest by way of a sports broadcasting career. It's no longer a job exclusively for men, although women have had a hell of a time breaking into it.
Years ago in college, when I was a Sports Department intern at Channel 7 in Boston, I found myself the lone female in that department. My duties included fetching coffee and carrying heavy equipment from place to place. I got to do some cool stuff, like go to Celtics practices. One time, we went to the old Boston Garden to do an interview with the Bruins. I helped my internship supervisor bring all the stuff into the Garden. I asked Bob if I was going to be allowed to watch the interview. He told me it would be in the locker room. I told him I didn't care. I was a professional. I lived in a co-ed dorm, I was engaged. It's not like I hadn't seen a dick before. He told me he was afraid that the players would give me a hard time. I retorted that if anyone wagged their wienie at me, I'd simply say, "I've seen better heads on a glass of beer" or "Last time I saw something that small it had an eraser on it." While Bob thought my clever retorts were quite amusing, and he was tempted to bring me in just to hear me cut down a professional athlete, at the door of the locker room he suddenly decided that it would be a very bad idea, and asked me to wait outside. He probably realized that having a girl intern in the Bruins' locker room was a lawsuit waiting to happen. Can open, worms everywhere.
Well it's the 21st Century, and there are lots of women reporters who go into the locker rooms for interviews after major sporting events. The men don't like it, and I don't blame them. Can you imagine the uproar that would ensue if male reporters demanded to be inside the WNBA locker rooms when the girls are walking around naked or in towels?
Let's face it, men are visual creatures. They get all stupid and bug eyed whenever some young hot chick shows some skin or cleavage. They can't help it. It's in their DNA. Probably a throwback to their knuckle-dragging cavemen days. They even start grunting, "A-huh, a-huh, heh heh, BOOBIES!"
This also brings up the issue of whether a woman deserves to be harassed if she's going to dress like a tart. Perhaps "deserved" is too strong a word. Should a woman expect to be harassed if she dresses like that?
Now this is where I become a traitor to my gender. You'd never find sports reporter Pam Oliver (or any of the other women reporters) dressed in skin tight clothing, while doing interviews with football players on the sidelines or locker room. So yeah, if you wear sexy clothing and look like a slut, or a bimbo, you need to expect men to act like the moronic, drooling cavemen that they are, no matter if you are a professional reporter or just a woman out and about.
What did Ms. Sainz expect was going to happen when she went into their locker room? For the Jets to keep their eyes above her neck and take her seriously? She admits their behavior on the field wasn't that bad and was more silly than anything else. But seriously folks, what did she think was going to happen once inside the locker room with all those sweaty, naked men and her in those painted-on jeans? Them to NOT make jokes or stare? It's like the intelligent side in men's brains switch off (assuming there is one) and the sophomoric teenage boys emerge. A-huh a-huh, BOOOOBIIIEEES!!!!
The only way I can see an end to this problem is to stop allowing reporters of both sexes to do any locker room interviews. There has to be a more appropriate place within the clubhouse to conduct interviews with the athletes.
What say you?
Posted by JoJo at 10:00 PM