That I took the last Clipper of the day out of Seattle. 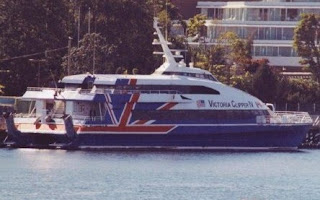 Because I was dying to get to Victoria. 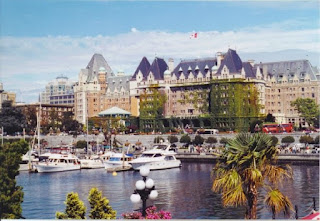 It was an impulsive trip, so it was late afternoon when I left. The light looked like this when I got there. 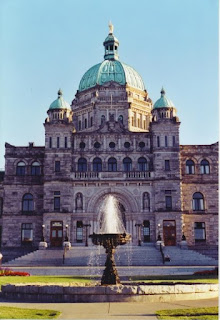 It was a surrealistic landscape in the Victoria of my dream, so the BC Legislative Bldgs wasn't located anywhere near the Clipper dock (in reality the Clipper docks right in front of it). I was rushing as fast as possible, and customs/immigration waved me through with only a cursory glance of my passport. I was so happy!!
I remember running with my stuff, trying to get to Parliament, which was many, many blocks away from me, but I could just see the top of the dome. They were waiting till I got there to turn on the lights (no idea why that was the case, but it was a pretty weird dream) and I started snapping pics of it. 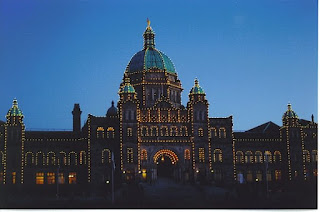 After I was done shooting pics, I realized it was well after midnight, but there were still people out on the street walking around. Not much traffic though. The city itself didn't quite look like it does in real life...it was sort of a mixture of Victoria, SF and Boston, with a lot of tall brick bldgs and narrow streets. I also realized that I didn't have any reservations for a hotel room, so I wandered around all night and ended up pretty far from downtown in a very green, quiet, stately neighbourhood w/ lots of flowers. I think I saw Rick Mercer and Peter Keleghan during my travels. That's where the dream ended. It was pleasant, I was happy and excited in the dream. The first decent dream I've had in ages as most of my dreams are very 'dark' for lack of a better word. I woke up today with the hugest longing in my heart. I can't shake it.
It's killing me that I haven't been to Vancouver Island since 2007. The only other city I have ever felt this way about is San Francisco. I can't stop thinking about my dream. And, as I write this, I stumbled on "Dateline NBC" and the story takes place in Victoria. I mean seriously. What are the odds? It's like every sign in the universe is pointing me in that direction.
Brian's so sick of hearing me whine, almost on a daily basis, "I miss Canada! I need a Victoria fix!!! I'm jonesing for Vancouver Island!" that he finally said, "JUST GO ALREADY! SHEESH!!" I have thought about booking a quick overnighter because I really want to see the holiday lights at Butchart Gardens. It's almost too late to make the reservations for winter. The thing that's holding me back is the weather. Traveling anywhere in the Northwest is a crap shoot between September and May. But December can be a vicious month. With my luck, we'll either have snow or a horrible wind storm on the day I'm supposed to leave. Then I won't be able to get to Seattle to take the Clipper. The weather isn't an issue once I get to Victoria. Everything can be done on foot and I will have a prepaid tour to see the lights. Plus my friend Moriah lives in Victoria and I'd love to see her, Bruce and the kids; it'd be fun to go to Butchart to see the holiday display with them. But at this point, I wouldn't mind just going next month for a couple of days. My boss even told me I should go somewhere.
We'll see what happens. Watch this space.....
Posted by JoJo at 10:00 AM