Happy Mardi Gras everyone!
I can't believe that it's been 20 years since this photo of Holly & me was taken on Fat Tuesday (although in 1990, I believe it fell on February 27). She and her hubby were still living on the east coast, and they flew out to visit Brian & me in San Francisco, for the Grateful Dead's Mardi Gras shows at Oakland Coliseum.
We had our faces painted inside the coliseum, before the show started. *sigh* my natural hair colour. 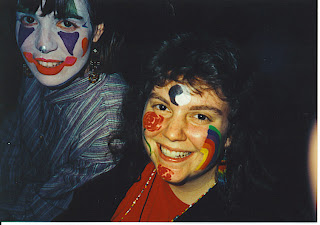 Her hubby had his face done like a skull. 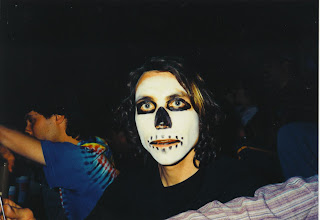 The Dead opened the show with "Let The Good Times Roll" and wove their way magically through Set 1, as only they could do. They played lots of my faves that night: Feel Like a Stranger, Sugaree, Mississippi Half Step and Bird Song.
Right before the Dead's 2nd set started, there was a huge parade down on the floor with lots of balloons and a giant dancing skeleton. They opened Set 2 with 2 Cajun faves, "Iko Iko" and "Man Smart/Women Smarter" and closed Set 2 with Throwing Stones into Not Fade Away. That was a fun, fun night. Long too. 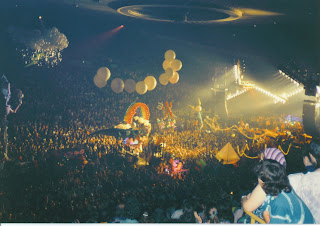 A couple of years ago I found some super cheap black fabric bags. This one didn't really start out to be an homage to Mardi Gras, but after I sewed the pearl-and-coin chain necklace to the top edge, and added the cabochon with beads in the center, I realized that it would work well to hold all my Mardi Gras beads. 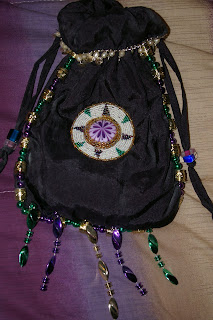 I bought some beads and sewed them around the edges and made fringe.
I was stoked to find those mask beads, which I sewed to the back of the bag. 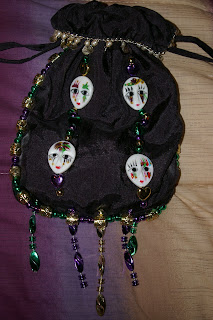 That's a purple plastic cabochon, around which I used gold beads to peyote stitch it onto the bag. Once it was secure, I started making the bead embroidered rings. It was after I used the gold, purple and green beads that the Mardi Gras theme kind of gelled. 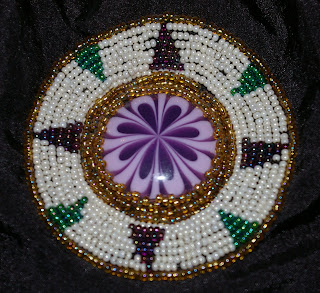 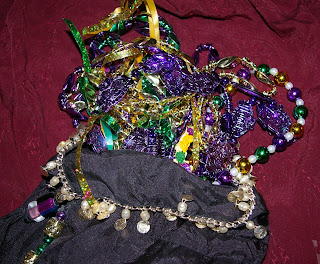 Maybe someday I will actually get to the real celebration in New Orleans!
Posted by JoJo at 10:30 PM