Ha. I got the Vincent Vixens' attention with that one, eh?
Actually, I'm talking about a happy accident that happened on Monday.
I took a mini vacation, from last Wednesday afternoon through yesterday. On Monday, I checked my emails from the weekend and found one from my old friend Gene Morrow, who is a merchant marine. He always sends out a mass email to everyone before he ships out to let us know that he'll give us his ship-email address as soon as they are underway. As I read, my eyes bugged out and I yelled loudly, "HOLY SHIT!". His email went on to say that he was currently Seattle, would be staying overnight in Tacoma on Tuesday, and that his ship was leaving from the Port of Tacoma on Wednesday morning. I was floored. All I could manage to email back was a quick, "YOU ARE IN SEATTLE???????" He said yes he was, and confirmed that he would be staying in Tacoma on Tuesday night. He was apparently under the impression that I was on the other side of the mountains, in Eastern Washington. His younger brother John kept telling him no, Joanne is near Tacoma. And Gene kept saying, "No way, she's on the other side." He emailed me his cell # and I called him and we made plans to meet up as soon as he arrived down here on Tuesday afternoon.
What a fantastic surprise! And to have it fall on a day off was just the best too, although I would have taken a half day at work (and I know Steve would have let me too) if I had to. I was so excited to see him and as usual, we had a great time together. Walked around downtown Tacoma, had lots of laughs. We even stopped by Brian's new office so I could introduce them. Had a good meal at The Ram. Lots of catching up on 'town gossip' (Gene knows everyone!) and our mutual friends & family news.

Here he is on the Chihuly Bridge of Glass. 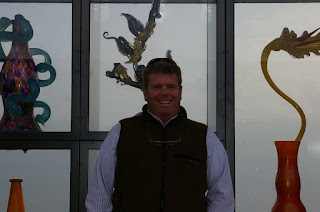 My parents are Gene's godparents (he always calls me his 'godsister'). My parents and his were best friends starting in the mid-1950's. Gene, Jr. (or as we used to call him "little Gene") is 10 months older than me, Marybeth (his sister, aka MB) is 6 mos. younger, and John 5 years younger. My dad often hired their dad to help him with plumbing jobs. We went to NH together in 1972, and after we kids were grown or in college, my parents, theirs & a bunch of other couples always took an annual trip to Maine together every fall from 1986 through 2002.
Gene, Sr. nicknamed me "Binky" when I was a baby b/c I loved my pacifier. I have always been, and will always be, Binky, to him. When I was in high school, I was mortified if he referred to me as Binky in public or in front of any of my schoolmates so he really made an effort to say, "Hello Joanne" but a look would always pass between us.....gratitude on my part for not 'outing' my nickname and amusement on his part. And I have to give the Morrow kids a ton of credit for never, ever calling me Binky in the halls at school or when we were with our friends. My life at Sandwich Elementary and High Schools would have been miserable. But I saw Gene, Sr. at my dad's funeral and was quite comforted when he called me Binky. My dad's casket had the American Legion Honor Guard, at the funeral home, which is what is done for our war vets. Gene was one of them. He also presented the folded American flag to my mom at the graveside.

My mom and Carol still, to this day, yack on the phone for 2 hours or more. We kids literally grew up in each other's homes from babyhood through high school. Some of my earliest childhood memories are of spending time with their family. Every time I got together with the those guys, it was guaranteed that, at some point, one or all of us would be spraying liquid out our noses & mouths from laughing. They were "town kids" and they knew everyone. They still do. That house was always busy with activity, people dropping in, tons of kids going in and out. It was a lot of fun, especially for me, who grew up on a lonely, quiet road with no kids my age, in a rural part of East Sandwich. Their annual January 1st "Bloody Mary New Year Brunch" was legendary in Sandwich in the mid-70's. Their large, old home was packed stem to stern with adults, and us kids would be outside playing in the snow and sledding. 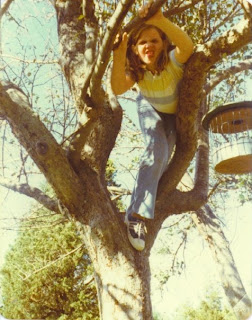 John in June, 1983, at MB's high school graduation party. He's married and has 2 kids and lives in Arizona. He's trying to arrange for his family, MB & her hubby Al, and Gene to all take a trip to Seattle so we can hang out. That would be a blast. I hope it comes together. 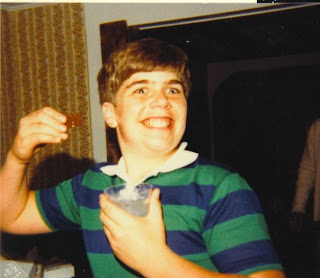 When we were little kids, Carol and my mom used to call Gene and I "The Twins" because our personalities are so much alike. We are both extremely stubborn and brutally frank....and our tempers are pretty similar as well.
Gene in 1975, trying to get my mom not to take his photo. 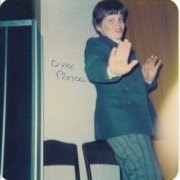 I am very lucky to have these people in my life. A very happy accident, indeed.
Posted by JoJo at 5:02 PM