I've been tagged by Daisy, of Daisy's Dead Air, http://daisysdeadair.blogspot.com/ for a couple of memes. I'll tag some of you to do them, or not, at the conclusion. I enjoy reading memes because you get to learn new things about your friends. The photos used are from Google Images.
So without further adieu:
Where would you have your 8 homes, if you were as insanely rich as the McCains?
List them. You don’t have to list your reasons, but if you do at least for a few of them, it would be more fun. And remember that the only rule is: the homes must be within the borders of the United States of America or else, within the borders of the country you live in, so as to utterly emulate the McCains. When you’re done, tag 8 people, so that they may join in the self-indulgence, forgetting about the crappy property market and the equivalent of The End of Pompeii on Wall-Street. You could spend your time hammering your doors and windows shut in preparation for the apocalypse instead, but it would be much less fun.

1. Point Roberts, Washington. This is a tiny slice of Washington State that can only be accessed by way of crossing into Canada, then crossing back into Washington. It's close to Vancouver and to the Tsawwassen Ferry to Vancouver Island. Since I can only name homes within my own country, this is the best compromise to get me as close to Victoria, BC as possible, otherwise I would choose to have a home on Vancouver Island. The black arrow shows Pt. Roberts.

2. Lake Quinault, Washington. Since we had to sell the "albatross" property we owned near the Lake in 2006, I would definitely buy a gorgeous but tasteful home on Lake Quinault, which is on the very remote Olympic Peninsula. 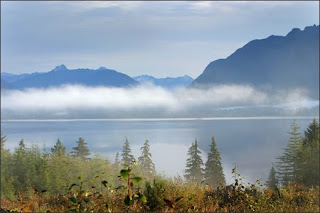 3. Juneau, Alaska. We would winter in Juneau, in a beautiful log home with big stone fireplace. 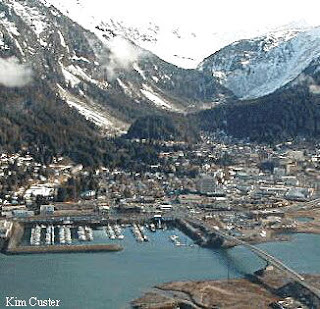 4. Springhill Beach, E. Sandwich, Massachusetts. I would have to have a lovely cottage on my fave beach in the world. 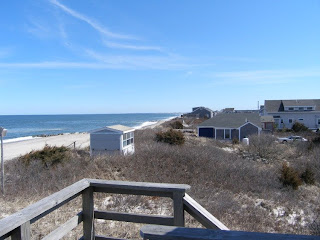 5. San Francisco . We'd own a home in the Richmond District, which was the neighborhood in which we lived, in the early 90's.

6. Fort Bragg, Mendocino County, California. Not to be confused with the military installation at Fort Bragg, SC. This was our fave vacation spot when we lived in CA and we always felt so at home there. 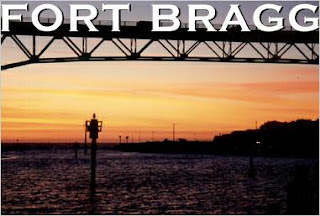 I'm getting really hard pressed to come up with 2 more locations.....

7. Camp Meeker, Monte Rio or Occidental, Sonoma County, California. Again, more fave places we visited frequently when we lived in Marin. Camp Meeker, Occidental and Monte Rio are right near to each other, so any of them would be satisfactory. 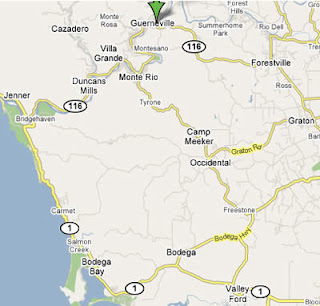 8. Glacier, Washington. Between Bellingham and Mt. Baker, near the Canadian Border, again, we'd have a log home with views of Mt. Baker. This is a home that's been for sale for quite awhile in Glacier. I would LOVE to own it. 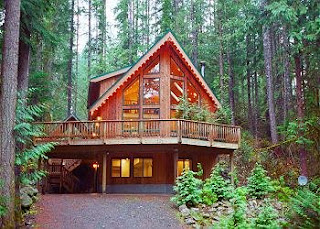 Link to your tagger and list these rules on your blog.*

Share 6 / 7 facts about yourself on your blog - some random, some weird.*

Tag 6/ 7 people at the end of your post by leaving their names as well as links to their blog.*

Let them know they have been tagged by leaving a comment on their blog .

RANDOM FACTS ABOUT ME:

1. I was on "Entertainment Tonight" with Brian, in September, 1989. We were on our way into Golden Gate Park for a free Bob Weir/Rob Wasserman and Jefferson Airplane concert, which was also a canned food drive. We were dressed in our finest Deadhead gear as we were going to see the Dead that night as well. ET stopped to ask us some "man on the street" questions. We never gave it another thought till the following week when our phone started ringing off the hook with friends and family who saw it.

2. I used to answer the request line at WZOU radio in Boston. Except the position was called "Phone Research". Here's an industry secret: Requests rarely, if ever, get played, unless the song is in the regular rotation. Once in awhile the DJ would tell me he'd take the next call, just to put a caller on the air. The rest of the time, I just sat there w/ a list of all the songs in rotation and would put a mark next to each one that was requested, then turn it into the programming department who would decide what songs got played more and what ones were dropped.

3. I've seen "Paper Moon" so many times I can do huge chunks of dialogue by all the characters.

4. Co-Class Punk Rocker of Sandwich High School's Class of 1982. For the first time, they had to break with tradition of electing just one female and one male to this particular category of the Senior Superlatives list. Apparently the class was equally divided as to who should have the honor, me or my best friend Liz. In 1982, Liz & I shared the honor, along with our friend Doug Ewer.

6. I have brewed beer. Brian supervised and helped me with heavy lifting, but I did the entire batch on my own. I brewed it for the "Queen of Beer" contest. Although it didn't win in Queen of Beer, we submitted it under both of our names for 2 other contests (in Indiana and Southern Cal) and won Certificates in both.

TAGGING: Fancy Schmancy, Drowsey Monkey, FenwaysPal (so that she'll update her blog), Bryde (if you feel up to it), Val, and Kris.