America: Where Anyone Can Run for Office

In addition to our presidential election on 11/4/08, there are lots of other offices and measures on our ballots. This is the first year that County officials can be voted on by "first choice, second choice and third choice". Instead of just voting for one, the second choice person will also be counted.
Locally, we get to vote for Pierce County Sheriff. Paul Pastor has held this position for about 7 years or so, and he was appointed. This year, he faces competition from 2 other candidates. One being Jesse Hill. 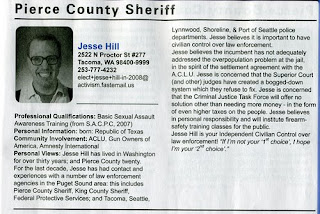 He is so outrageous and his antics are so amusing, that Brian's decided to make Jesse his first choice for Sheriff. I chose Pastor for my first choice and Jesse as my second. I don't think Paul Pastor has anything to worry about, but can you imagine if Hill were to actually win and beat Sheriff Pastor out of the job? lol!!! Check out this article about Hill, it's pretty funny.
Robert 'The Traveller' Hill outspends incumbent Pierce County Sheriff
by Ian Demsky, The News Tribune

A dark horse candidate running for Pierce County sheriff is outspending the man who has held the job for the past seven years, recent state campaign filings show. According to the Washington Public Disclosure Commission, Jesse Hill has spent $28,059.59 to Sheriff Paul Pastor’s $23,812.22.

Pastor, who is running for the first time for the post to which he previously was appointed, said Hill’s spending isn’t changing the way he’s running his campaign. “I’m not really keeping track of him,” Pastor said. “I’m running on my experience and track record, and I think voters will be smart enough to recognize if someone is trying to use dollars to buy an outcome.”

That track record includes more than 20 years of law enforcement experience while Hill says in the voters’ pamphlet that his professional qualifications are “Basic Sexual Assault Awareness Training.” The race’s third candidate, R.P. Kollu, says he’s qualified for the job because he will “meet legal requirements for sheriff.”

In addition to the forgery case, Hill has had a host of minor run-ins with police over the years. In 1998, for example, he was stopped for a traffic violation, but challenged the officer’s authority, rolled up his window and dialed 911 from his cell phone to report a man with a gun outside his car, a Federal Way police report says.

Earlier this year Hill twice tried to buy a .38 Special revolver from a local gun store but ultimately was denied “for mental health reasons,” according to a Tacoma police report. “I don’t see where I’m not able hold office at this point in time,” Hill said, pledging to pursue the required law enforcement training if elected. “There exists no health basis to limit my access.”

Hill’s filings say every penny of his election contributions was given to the campaign by Hill himself. Such affluence seems to clash with personal financial statements filed with the state, across which Hill repeatedly wrote the word “Indigent!” and on which he lists no job or other sources of income.

So, where did the money come from? Hill says he sold some gold coins he has collected. “I’ve been buying them over the last 20 to 25 years,” he said in a recent interview. “Or, more accurately, trading them for Federal Reserve note dollars.” He said that he didn’t believe the coins needed to be listed on the disclosure forms, which ask for sources of income over $2,000, real estate holdings, bank accounts over $20,000 and intangible assets such as stocks and bonds.
Much of that money went toward campaign mailings and radio spots, but Hill also reported spending:

“We weren’t sure all that money was spent to benefit his campaign,” said Lori Anderson, spokeswoman for the PDC, which oversees candidates’ filings. “But it’s his money and he reported the spending was for the campaign. We’re not going to argue with him.” Anderson noted it was a busy time for the office and that officials had limited resources for policing the candidates. If Hill’s disclosures turn out to be inaccurate, he may be asked to amend them.

Hill’s sudden prosperity raises additional questions. He said he couldn’t pay for his own attorney in the May forgery case and was represented by a public defender. Hill says that at the time he didn’t count the gold coins as assets. “The court doesn’t use lawful money anyway,” he said.

Presented with the disclosure filings, Michael Kawamura, the director of the Pierce County Department of Assigned Counsel, said he will ask for an official inquiry to see whether any of the county’s expenses should be recouped. “We’re not in the business of representing people who can afford their own attorney,” he said.
Posted by JoJo at 3:46 PM