We got Pepper in early 2003, long before I had a blog, or even knew what a blog was. Consequently, all of the great pictures of her are permanently adhered in her special scrapbook, which is why I seem to post more pics of Sagan than I do Beanie.

I'm starting to gather stuff together to pack for my trip to Cape Cod, and I always take along a small "travel album" of pics of my sweet little furkids. Here are some pictures of little Pepper from that album.

Brian shot this about 30 minutes after he'd brought her home from the Humane Society. Isn't it sweet? The info left by her family said she was about 2. She was still very puppy-like that first year. She was an outside dog at the time, and so for a few months, she lived in a kennel next to the garage, but she was inside by summer. She didn't know what toys were, and she didn't even know how to walk up and down stairs!! We had to teach her all that stuff, as well as housebreaking. 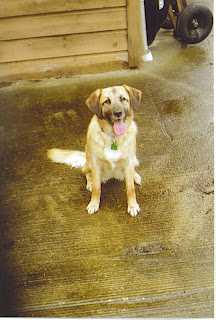 OK, this may be the reason that Snuggsy doesn't like having her picture taken. She was not on board with these bunny ears and it took a lot of time and patience to get a decent picture of her with the Easter stuff on the table. What I was doing was taking seasonal photos of her to compile into a custom-made calendar for 2004, and I needed a shot for the Easter page. This particular photo is one of the outtakes, as the best one is in her scrapbook. 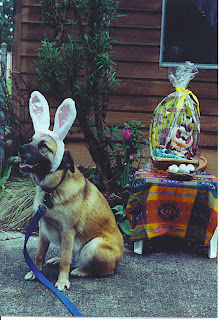 We took Mrs. Bean Jeans to the Maris Farms Corn Maze (or "maize maze" if you will) in October, 2003. She was sooooo happy to be on such a long walk and she got lots of attention with her bandanna. What a pretty little girl!!! 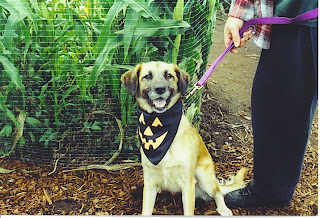 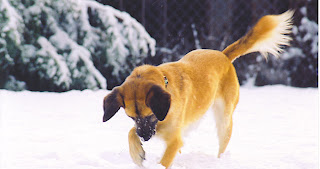 Christmas Day 2003. We had this photo made into holiday cards for the following year. 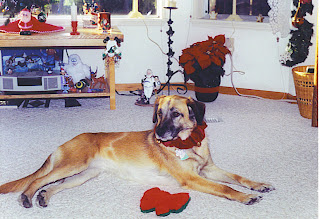 Long Beach, Washington, February, 2005. She tentatively went to the water's edge to have a sniff. A little wave came in, sucked the sand out from under her back feet and she was struggling to find purchase. Needless to say, she avoided the water's edge after that.
"HALP! I drowned'ed!" 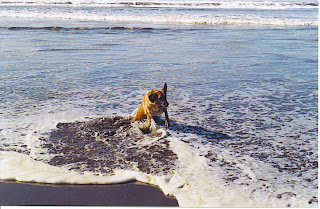 Washington and Oregon are very dog-friendly states, and dogs are allowed off-leash on the beaches. There were a few running around on Long Beach when we visited in Feb. '05. This looks more vicious than it actually was. They were playing and chasing each other around. I forgot I'd even taken this picture till I got them back. It's a great action shot! 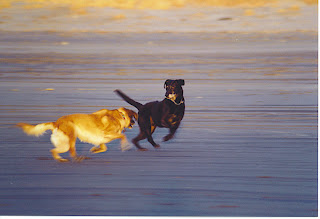 And finally, a professional portrait we had done in 2003 as well. 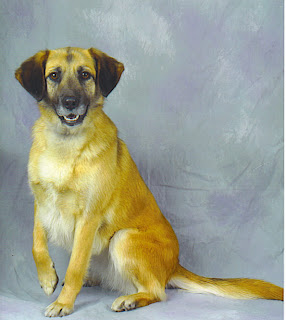