We've had the good fortune of living in 2 homes that get a Stonehenge-like effect in the spring and fall.

In our townhouse in Fairfax, CA, we had skylights in the cathedral ceilings and twice a year, a beam of light would creep down the wall on the stairs and light up the usually dark livingroom for a brief few minutes. We even hung a crystal prism that didn't see sunlight for most of the year, except on those few days in the spring and fall, when it would shoot rainbows all over the walls. Every time someone new would come over they'd say the same thing, "um...why do you have a crystal hanging there?"

Unfortunately I did not realize I had black & white film in my camera when I shot this picture, the one day that we were actually home for the full-on sunbeam hitting the crystal, in September, 1998. It was the only time I was able to shoot the effect and I blew it w/ b&w film! Oh well. 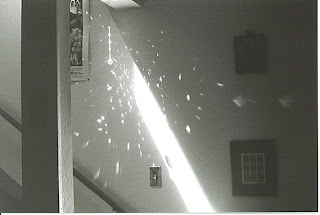 Then we moved into our house in Washington in August, 1999. That September, we witnessed the same kind of "Stonehenge effect", only this time it was with the cut glass in our front door and the hallway wall downstairs. Then it happened again in April, 2000, where the circle was centered on the wall. We decided that we would not hang any posters on this wall, and just call it the "Sun Canvas". Although the cut glass provides pretty rainbows and light during the long summer days, only in Sept. and Apr. is the design centered like this. I shot this on Sunday, 4/13. See the kind of pointy shadow on the left? That's Sagan's ear. He, of course, had to escort me to the landing and sit next to me as I shot. 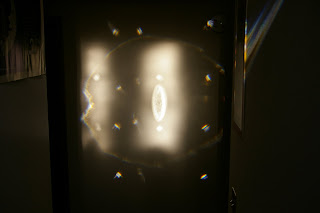 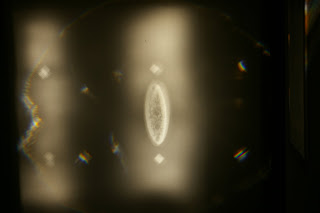 Closeup of rainbow on the wall. 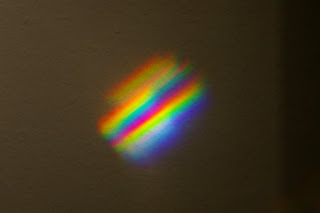 The frosted design on the pane acts as a stencil. 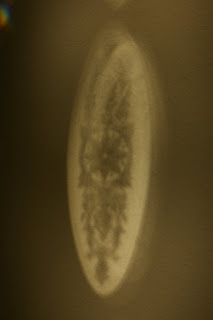