"Ahhhhh." That's the sound of contentment. It's pouring rain and cold, though not windy at all. The passes are getting snow by the foot. We're home, all cozy and snug, enjoying our time off. I have a batch of cranberry bread fresh out of the oven, Snax & Snuggs have extra large chewstix and we're getting ready to watch the Seahawks game in about 30 minutes. Brian's got some pork chops with potatoes, turnips, carrots & onions in the slow cooker, for dinner later.


Thursday was our office Crissmiss lunch, at Stanley & Seaforts in Tacoma. It was dee-lish-uss! There were 6 of us: Me, Deb, Steve, his wife Mary, her daughter Lyndsay (age 28) and Steve's daughter, Stephina (age 23). We got the 3-tiered appetizer which was: prawns on a bed of garlic mashed potatoes, braised steak tips with sticky rice & ginger, and warm crab/artichoke dip with warm, buttered herb foccacia bread. Then I had the restaurant's famous signature "Broadway Pea Salad" which is sooooo gooooood. I've been able to make a fair version of it at home too. My lunch was dijon chicken with garlic mashed & veggies. I crave the chicken dijon so much that it's the only thing I've ever ordered at Stanley's in all the years we've gone there!! After lunch we rolled back to the office to open gifts, then Steve closed down at 2:15 and sent us home. I've been off since then.


Friday morning I got up at 7:30 and did all the errands - groceries, picked up prescriptions, drycleaner, bank, gas station. Stopped at the food bank and dropped off a couple bags of groceries. Everyone was in such a great mood on Friday!! I had great driving-karma. A man held the door for me at the bank, even though I was still several steps away - I hurried out and thanked him and he smiled and wished me a happy holiday. It was really nice!! After I got home, I spent a few hours wrapping presents and then I set up the small tree downstairs on the card table, which is covered w/ a Crissmiss table cloth. It looks cute. Brian was home by 2:30 and we enjoyed drinks upstairs till it was getting dark.

Yesterday, I slept till 9:00 a.m.!!! Brian got up at 10:40!! I decided that since I had nowhere to go, I would make it a pajama day. That's right, I was in my jammies all day, under my blanket on the couch, colouring in my colouring books & watching TV with Brian. It was AWESOME. It's what he and I live for! It was raining yesterday too. Sometimes on stormy Mondays, he'll email me from work about how much he wishes we were home to enjoy it. Well, we are taking full advantage of it this weekend!!


We rented "Fido" from pay per view yesterday. It's a sweet, heartwarming story about a boy and his zombie, Fido, in the 1950's. Yes, that's right, "sweet" and "heartwarming" are being used in a sentence about zombies. I highly recommend it. It was very funny & witty, but also sweet. I'm a chicken when it comes to real horror movies, but this isn't a horror movie at all.

I crashed at 8:30 last night and got up at 7:30 today so that I could get to Rite Aid to pick up some scotch tape. I'm spending the rest of today in my jammies as well!


They say that Michelangelo went blind after painting the Sistine Chapel, because he was up close to it for so long. In early 2002, I started this Santa cross stitch. Sometime in the spring, I got it in my head to enter it in the Puyallup Fair, in September. Which meant I only had until August to finish. I worked on it at lunch, after work, and all day on the weekend for months. I got it done & framed just in time to enter it in the Fair. I didn't win a ribbon though.

However, over the course of late 2002 & into 2003, I noticed that objects in the distance started to look a bit out of focus. My eyes felt weird. I felt a little dizzy if I looked into the distance too far. I finally went to the eye doctor and ever since then, I've had to wear glasses full time. My eyesight is just awful now without glasses. Everything is so blurry. And so that is why I call this particular cross stitch project, "My Sistine Chapel". 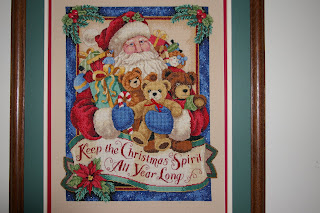 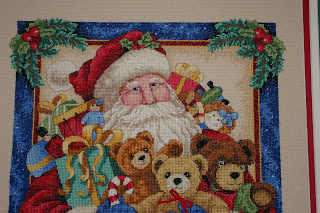 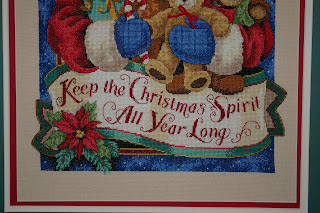 Have a Happy Saturnalia, Cool Yule & Merry Christmas!!!
Posted by JoJo at 3:12 PM