I just took out the photo album of our trip across the country in 1989 when we moved to San Francisco, because I'm going to have the pictures reprinted and do a really nice album with more decorations and stuff. I'll blog some of the highlights from that trip at another time, but I just had to show you an amusing picture I shot in Columbia, Missouri.

That day, we got to Columbia kind of late because we'd spent the morning and early afternoon in St. Louis, touring Anheuser Busch & having lunch on a riverboat. We saw this store: 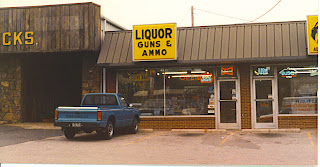 Man alive did we bust up laughing. And the jokes were endless! The name of the store fits well into Warren Zevon's "Lawyers, Guns & Money" song, so ever since 1989, we now sing, "Send liquor, guns & ammo, the shit has hit the fan!"

Can you imagine a worse combo? Liquor, guns and ammo? Let's git 'em good-n-wasted an' start shootin' cans 'n shit. I'm sure this store will, no doubt, horrify my Euro readers.

We decided we were going to go back the next day and have Brian pose in front for a photograph, wearing a felt Amish-type hat of mine and holding in one hand, a fake rifle that my dad made for me out of plywood and copper pipe, and a beer in the other hand, and he would probably be pulling some kind of buck-toothed, exaggerated hillbilly face. Both the fake rifle and hat were easily accessible inside the U-Haul moving truck we were driving, so we figured this would be a cinch.

We got up super early to hit the road, and we went past the store. Keep in mind, it's like 6:45 a.m. We figured we could take the photo and be on our way in less than 5 minutes. Imagine our shock, as we rolled past, to see it open. It's 6:45 in the morning, and the place is freakin' open. People coming out with beer-n-bullets. Ain't no way we were going to pull into the lot and take that staged photo!! I really don't think Billy Bob and Cletus would have taken kindly to us city slickers makin' fun of them. Brian consented to roll past real slow while I hung out of the passenger window and shot the photo. If you look real close at the windows on the right side of the store, you can see the reflection of our U-Haul as we rolled past.

Ah yes. America's heartland. Ya gotta love it.
Posted by JoJo at 9:29 PM