A year ago today, day-wise which was Thursday, December 14, 2006, the entire region was loading up on supplies and battening down the hatches in preparation for a terrible wind storm that was bearing down on us. I remember it was so dark and the rain just poured buckets all day long. I was really freaked out and I left work at about 2:30 to buy wood and take all the stuff out of the yard that could blow away.

The wind started that evening, and by 10:00 pm, our power was out. I took a Xanax because I wanted to be completely knocked out....that way if a tree did come through the roof, I'd never feel it. Both Pepper and Sagan were frightened beyond belief. Sagan vomited in his crate; Pepper couldn't stop shaking.

In the morning, the sun came out, and we ventured outside to assess the damage. Our power was still out and it stayed out for 5 long, cold, depressing days. We were very fortunate that we sustained no damage, but we did have our work cut out for us in clean up. 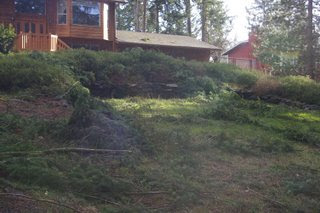 This was the reason our power was out for so long. The worst part about the storm's aftermath was knowing that our block and this block (which is the street behind ours) were the only ones without power. It was very demoralizing to see all the other homes in the neighborhood cheerily lit for the holidays, knowing that those people had put the storm behind them, then turn onto our pitch dark street. I have to give major credit to both Brian and I because during that entire time period, it would have been so easy to turn on each other, snap, fight, etc., because of the extreme stress. But we never let it get to that point. We got home, he built the fire, I lit the candles. We ate out or picked up food to go. We were both upset, depressed, and angry at Puget Sound Energy, but we did what we had to do and we never once snapped at each other, and it could so easily have happened. We sat in the dark and read by flashlight till it was time to go to bed. 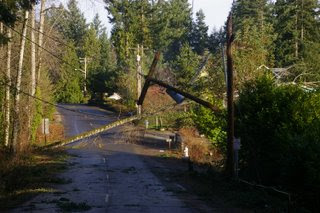 It's one thing to hear about other people in other regions losing power for days on end, and think, "gee that's too bad," but it's another thing to BE one of those people. I have much greater understanding and empathy for the people in Oklahoma right now who are still w/o power because of the ice storm. And our own Washingtonians on the coast are still coping with the aftermath of last week's storm, floods and mudslides. 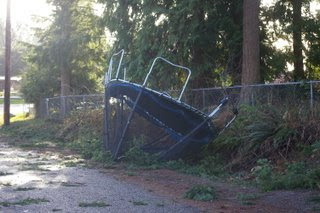 After the storm, the state looked to the residents to come up with a good name for the storm. I suggested "The Big Blow". I think they settled on "The Chanukah Eve Wind Storm of December 14, 2006" which is awfully wordy and hasn't caught on. Most of us just call it "the December, '06 wind storm". 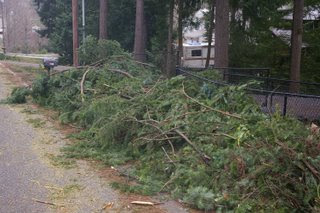 As scary and stressful as it was last year, I'm glad we went through it. Just like with the earthquake we lived through in San Francisco. Now we know what it's like, and so far, we've survived it.
What doesn't kill you makes you stronger, right?
Posted by JoJo at 6:19 PM