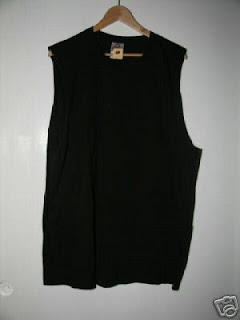 After MONTHS of losing out on many Vincent shirts on eBay, usually because the bids went over my budget, I FINALLY won a VDO shirt!!! For only $61.00!!!!! That's all I wanted.... one shirt at a reasonable bid. What a great way to end the year, eh?

When I checked eBay earlier this week, I showed Brian this shirt that was available. He looked at it and quipped, "So do you guys call that one 'The Black Wifebeater of Hotness'???" I cracked up laughing so hard. Everytime I mention TBTSOH, he usually rolls his eyes, so I thought it was pretty quick of him to come up with a name for this shirt. Then he told me yesterday he kind of wanted me to win the auction because he coined the name.

Now, does anyone know what film or show he might have worn this in? It doesn't look like something Goren wore. Perhaps Charley from "Crooked Hearts"? I don't remember Bill wearing a shirt like this in "Mystic Pizza". Did Carl Stargher wear one? Valentino maybe?