These guys pretty much describe me today:

Sneezy, from cutting the back yard last night & doing the hated and dreaded weeding.

Grumpy because I'm Sneezy and Sleepy. And the office air con died. So I'm in shorts today and a very light shirt, with my hair in a ponytail to keep it off my neck. BTW, it's cool and cloudy, but I'm still hot. I'm always hot. 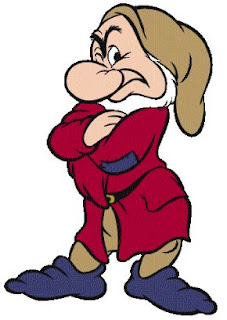 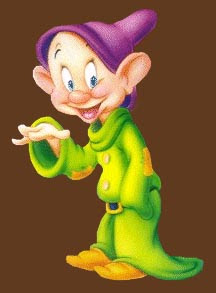 Friday the 13th - It's Only Bad Luck if You are a Knight Templar. 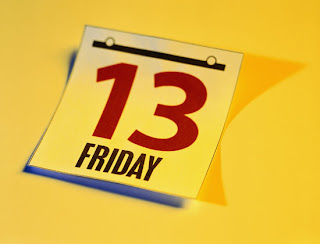 It was on Friday, Oct. 13, 1307, that France's King Philip IV had the Knights Templar rounded up for torture and execution. The Knights Templar were an order of warriors within the Roman Catholic Church who banded together to protect Christian travellers visiting Jerusalem in the centuries after the Crusades. The Knights eventually became a rich, powerful ‹ and allegedly corrupt order within the church and were executed for heresy.
Why do people fear the number 13? Christian theology is one source. The number thirteen is significant because it is the number of people present at the Last Supper, and Judas, the apostle who betrayed Jesus, was the 13th member of the party to arrive.Christians have also been wary of Fridays because it's the day that Jesus was crucified. Some theologians believe that Friday was the day that Adam and Eve ate the forbidden fruit, and Friday was the day that the Great Flood began.To keep your mind off the matter of luck, here's some Friday the 13th trivia:

Sources: Newsday Article and article by Jenni Dillon.
Brian and I have kept Sagan crated during weekdays since we got him in early 2006. We don't like crating him, but we needed to make sure he was completely house trained, and past his rambunctious puppy months, before attempting to let him out all day.
We used to crate Pepper too, but eventually let her have the run of the house. At first she was good, but one day Brian came home to find the den completely torn apart. Books were pulled off of bookshelves, knickknacks on the floor.....Brian was frantically trying to clean it up before I got home. The next day, I came home to find the livingroom torn apart. It was very unusual for her to act out like that. We eventually figured out that because we had some new furniture half built in the middle of the floors in the den and up in the livingroom, and because dogs are very sensitive when their environs change, she went nuts. We quickly finished assembling and moving everything and she has never done that kind of destruction again.
We have left Sagan and Pepper alone for about an hour or 2, but never the entire day. So I figured, why not just tempt fate and leave both dogs out today. I shut all the doors to all the rooms, so they only have access to the livingroom, halls, stairs and kitchen. I made sure all foodstuffs were pushed well to the back of the countertops and we bought a trash compactor last winter to keep Sagan from getting into the trash can. Sagan won't even go to the bathroom indoors at doggie daycare so I'm not that concerned about his house training.

The only thing I am hoping is that they don't get into a dust-up. Sagan absolutely adores his big sister and will tease her till she plays with him (or growls menacingly and slaps at him). Pepper, on the other hand, grudgingly tolerates her little brother. When I locked the door, I heard her loudly growl and bark at him...I swear I heard the words, "Listen up Dumbhead, Mommy left me in charge, so back off!"
Unfortunately, I checked the local dopplar radar and saw that a very bad thunderstorm passed over my house between 8:50 a.m. and 9:30 a.m. The reddest part of the radar, which is the worst part of the storm, went right over my neighborhood, near the southern end of Lake Tapps. I can only keep my fingers crossed that my little furchildren weren't spooked enough to do any real damage to the rooms to which they have access. I guess I'll find out when I get home tonite!
Posted by JoJo at 10:57 AM