The new Tacoma Narrows Bridge opened yesterday with a ton of fanfare and hoopla. The new bridge will carry traffic eastbound to Tacoma, and the old bridge has turned into westbound lanes only, to Gig Harbor. There is a toll booth, but people who cross every day for work have transponders on their windshields, called "Good to Go!" passes. Here's a shot from this morning. So many people stayed home today because they were afraid that traffic was going to be really bad, and it wasn't. When school is back in session in the fall, it'll be a different story. 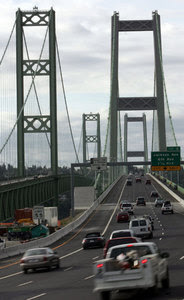 The Bridge has been under construction for about 5 years now, and highway 16 has been in the process of widening and adding lanes to accomodate the bridge traffic. Unfortunately, the last part of the project has not been completed, and that is the tearing down and rebuilding of the 2-lane Nalley Valley Viaduct, so instead of traffic bottlenecking at the bridge, it now bottlenecks further down Hwy. 16. I am in the process of figuring out a new route to work when the viaduct teardown begins in 2008.
This is an aerial of the current Nalley Valley Viaduct, it's the elevated section from the "t" in "Center Street" to the "T" in "To 38th". WSDOT will be tearing it down and rebuilding it to include more lanes. 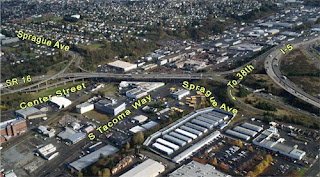 We did not drive into Tacoma for the grand opening, hating hot weather, crowds and traffic the way we do! My boss was at the office yesterday at 6:00 a.m. and said that our parking lot, as well as the parking lots at TAPCO Credit Union next door and across the street at the community college were already packed w/ people who parked so as to take shuttle buses to the bridge. Yesterday was the only time that it would be open for pedestrian traffic. 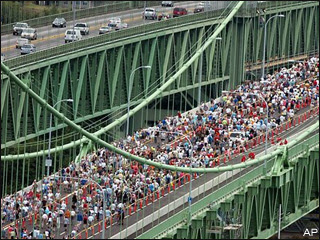 Here's a nice aerial, looking northwest, to Gig Harbor from the Tacoma side. 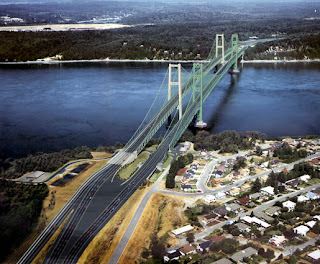 This is current construction on I-5, something I've been navigating for the past several months. They've torn down those overpasses and are rebuilding 2 of them. That's the Tacoma Dome in the background. 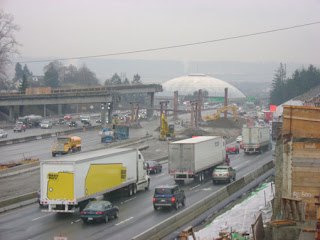