Truckin' Up to Buffalo & Other Honeymoon Stories

This is July 3rd, 1989. The first Dead show of our honeymoon tour was the night before at Foxboro Stadium in Massachusetts, and it was great! Now we were getting ready to head up to Buffalo, NY, or "truckin', up to Buffalo", if you will, for the July 4th show at Rich Stadium. The Dead played "Truckin'" the night before and the crowd went wild when they sang that line since Buffalo was the next stop.

We'd all crashed at Jef's apartment in Pawtucket, RI the night before, and here we are outside a diner in Plainville, MA, about ready to leave. Left to right are: Holly, Brian holding Mooey on my head, Jef, and our friend Dave, who needed a ride home to the Rochester area. He'd found us inside Foxboro Stadium the night before and asked if we could take him. So we left on the long 10 or so hour drive from southeastern Massachusetts to western upstate New York, in Holly's 1966 Dodge Dart with the ragtop roof. We dubbed her car "Bertha". Of course we had the top down the whole way up to Buffalo. (Note to Mark: We had THE top down, not OUR tops down!) That was a crazy ass trip because every single car on the Mass Pike and New York Thruway was full of Deadheads going to the next show. We made for quite the colorful and merry traveling band of hippies. 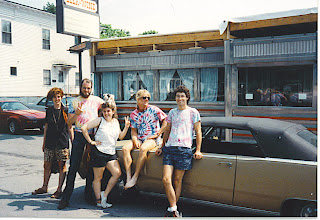 Bertha was really pushed to the limit on this entire road trip, and we encountered more than a few mechanical problems along the way. Here we see Jef, Dave and Brian pushing Holly's vapor-locked car to the gas pump, deep in upstate NY. When Deadheads follow the band, they know how to make themselves at home. It was really amusing to pull into the rest stop and see it completely taken over by hippies. VW vans and school buses blasting live Dead tapes, people playing hacky sack & frisbee, wandering around talking about last night's show and what they might play tomorrow and you know they'll do "U.S. Blues" because it is after all July 4th; others have turned on the rest area's water spigot and are filling their water jugs. We tumble inside to the restaurant and Deadheads are everywhere, eating meals & lined up to use the restrooms. It really was a boon to those roadside rest stops when the Dead would come to town because they'd get loads of business, and they were very accomodating. Although occasionally you'd see Mr. & Mrs. America with little Bobby and Sally, staring at us like we are hippie freaks! Oh wait, we are. 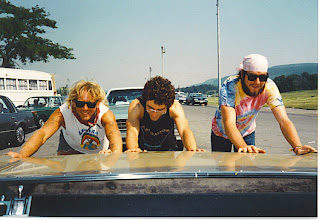 After the July 4th show, which was great, we had another couple of days to get from Buffalo all the way south to Philadelphia for the July 7th show. We did the drive in one day, again another 10-11 hours pushing poor Bertha down the Thruway again. When we got outside Philly in New Jersey, Brian called his parents and they came to meet us at the exit. They knew that we were coming, of course. We were going to stay with them for a couple of nights, while Holly & Jef stayed with one of his friends outside Philly.
His folks had never met me before and in fact Brian hadn't even seen his family in about 4 years. They welcomed me with open arms and they were actually quite tickled when they found out we were already married. So I got to meet the whole family and it was a really nice little side trip.
Everyone who sees this goes, "who's in the picture with Brian?" which always cracks us up. Because no, he doesn't look ANYTHING like his high school graduation photo AT ALL. 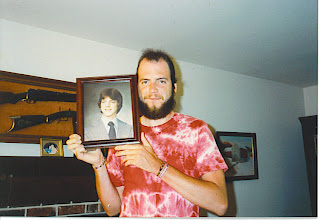 The Philly show was July 7th and it was rough. It was at JFK Stadium and it was a scorcher. Easily over 100, with 100% humidity. Nothing you did kept you hydrated. Cold water was tepid within minutes. I knew I was gonna have a heat stroke episode fairly early on when I felt the nausea start, but I thought if I can just keep still, quiet and drink lots of water, I'll be OK. Well, our seats were 5 rows off the field, where it was registering 110 degrees, and we faced west. The sun was going to be on us all goddamn night. I made it through Bruce Hornsby & the Range's set OK, but when a woman sat in front of me wearing a long sleeve argyle sweater, I started to get the cold-n-clammies, and the shakes. Brian grabbed me and started pushing me up the stairs ahead of him, to get us up into the breezeway where there was a nice breeze, open air, and shade. He was yelling to me, "GO GO GO GO HANG ON! WE'RE ALMOST THERE!" and my vision was going and my hearing was buzzing. When we got to the top he yells to me, "OK!" and I dropped into his arms and was out a good 20 minutes. He'd elevated my legs by propping them up against the wall and just waited it out. When I finally came to, many kind Deadheads had stopped to offer water, ice and good cheer. Rock Med stopped by and said I was just one of many who were dropping from the heat.
We couldn't bear the thought of going back to the hot seats with that crush of people, so we left poor Holly and Jef to wonder what happened to us, and we exited the stadium. We could hear the show just fine from outside, so we spent most of the show picking up trash in the parking lots, and sitting under a tree once night came. It was a bad scene though; a steady stream of ambulances came and went from the stadium, and later on, Holly and Jef told us that another person in front of them had a complete freak-out, probably from bad drugs, and it was very difficult and painful to watch. Some of the people we encountered outside were also clearly on very bad drugs. That was the last event ever held at JFK; it was torn down by summer's end.
Brian and I took a cab back to his folks' house, because originally Holly & Jef were hooking back up w/ us for the last leg of tour. But all I wanted was a shower, air conditioning, cold drinks and a bed. We conferred w/ Holly and Jef to discuss the revised plan, and we left. We got this wicked cool black cabbie who was game for this trip from Philly all the way to Voorhees, NJ and oh by the way, none of us really knew exactly how to get there, but between the 3 of us, we managed to figure it out. It was a $75 trip with tip, but well worth it. Needless to say his parents were surprised but happy to see us and I gladly let his mom dote on me the next day!
These next photos are from the last 2 shows we went to, at Giants Stadium (aka The Meadowlands), in New Jersey, on July 9 & 10. The last night of the shows we had a thunder and lightning storm the likes of which we'd never seen before. It started raining during the Dead's first set. As the time went on, the harder it rained. Everyone was completely soaked to the skin, but it was still warm out. Then we could see the lightning coming. So they start playing this killer song called "The Music Never Stopped" and as they are playing, the lightning is literally dancing above the stadium. It was a dangerous situation, in retrospect, with all the water, people and electrical equipment, but we didn't care. We could hear the thunder over the roar of the rain, crowd and band, but we kept on dancin'.
Then it happened. One of the most unbelieveable Grateful Dead "oo-ee-oo" moments I've ever experienced. As Bobby sings the lines, "crazy rooster crow at midnight, balls of lightnin' roll along..." a bolt of lightning hit the top of one of the light towers above the stage. It was blinding. The crowd. Went. Mental. I have the tape of the show.....every time I hear that collective cheer and applause, I get goosebumps. And to this day I've never heard a version of "Music Never Stopped" played like the way it was played that night. Jerry coaxed some amazingly fast, "lightning fast" if you will, licks out of that guitar during the jam at the end. After the rain subsided as they finished Set 1 with "Don't Ease Me In", the bad weather had passed, but we found out later that there had been tornado warnings during the height of the storm. 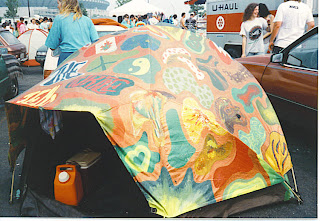 We had to give this guy props for his brutal honesty and yes, we gave him "spare change for more drugs." 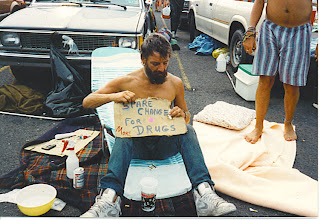 Just one of the many buses used by Deadheads to get around from place to place. We were particularly fond of The Cool Bus, with half a VW welded onto the top, and painted in Rastafarian colors. And another fine example of how Deadheads make themselves at home in the parking lots. Oh yeah, and we had been living in San Francisco only a few weeks when Brian saw The Cool Bus parked in Haight Ashbury, although neither of us ever saw it ever again. 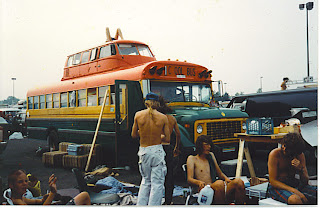 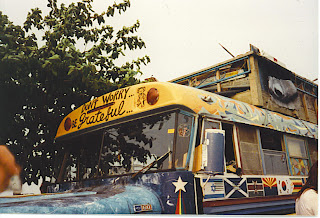 We headed back to Cape Cod on July 11th, sunburned, windblown but really, really happy, although it was a bit of a paradigm shift to go from being on the road with hundreds of friends to being the only Deadheads on the road at all. This tour was one of my many dreams that I'd had, wistfully wishing I could hit some shows without a care in the world. It was the best honeymoon ever.
We stayed in Massachusetts till July 17th, when we hit the road in a U-Haul, towing my '87 Toyota Corolla, for the first leg of our move to San Francisco.
Posted by JoJo at 11:57 PM