Saving the best for last

Here's the last of the amusing ads from the April, 1964 GH magazine.

Did I tell you all that I've taken up quilting too? Yes, yes I have. So all of my female friends can expect ga-roovy patchwork aprons like those seen below, for holiday and birthday gifts. How lucky are you? I'm especially fond of the long one. Nothing else says good cookin' like a riotous patchwork of color. 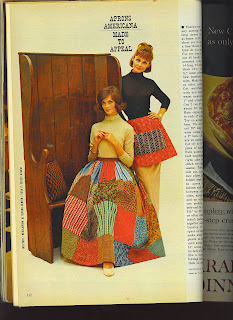 I think this ad was for carpet, but what cracked me up was the incredibly chaste scene it portrays. Obviously the man and young woman went to dinner with the woman's parents, seen over by the stairs. Everyone's all dressed up, mom and dad looking on in delight from the staircase to see that nice young man proposing to their virginal daughter in the living room, while at the same time trying to give the couple some privacy. Yeah, just wait mom and pops. This was 1964....in 3 years these two younguns will have long hair, wearing beads, doing acid and be living in San Francisco. We can only hope, anyway. 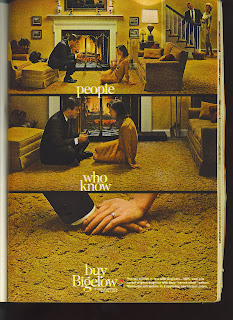 "Spring Cleaning is an awful job!" the Stepford Wife says exasperatedly. Well, um, maybe if she wasn't wearing a dress and shoes it wouldn't be so bad! Did women really dress up to clean their houses in the 60's? Did all mothers look like June Cleaver? ("Ward, you were a little hard on the beaver last night" snicker snicker). Hm. That reminds me. I have to move the tires out of my bathroom later today. Page 2 of this ad showed a happy and perfectly coifed Stepford Wife, now that AJAX had stepped in to help with the spring cleaning. Now she can go make hubby a martini and fetch his slippers and paper like a good little 60's wife, because if she does...... 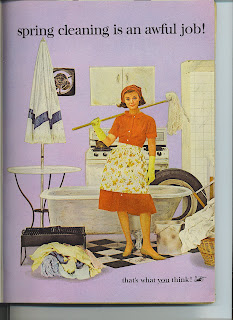 ....maybe he'll come home tomorrow with A Deserving Treat For Kitchen Queens!!! Oh bliss! Oh joy! He's brought me home the Lustroware Elegante Kitchenkeeper set I saw at the S&H Green Stamp store last week! He remembered!!!! The ad goes on to read, "You were meant for each other....because Lustroware Elegante Kitchenkeepers are your 'golden' opportunity to realize dreams of elegance without extravagence." WOW! I believe that 'golden' is in quotes in the ad to point out the fabulously faux gold knobs on the tops of the containers. "You were meant for each other" ? Who, the woman and her set of kitchen canisters? Yes that's it; that's it exactly. We women always have a special relationship with the canisters. Her fixed smile and vacant stare really, really scare me. 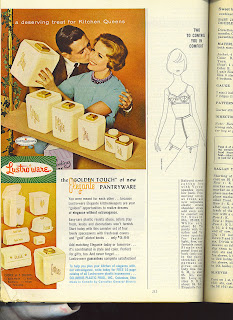 Oh now here we go, the ultimate pinnacle of 60's efficiency and space age technology! I bring you the Westinghouse Laundry Center!! You can fit them both under a counter! "Think of all that extra counter space!" Oh that's right, she needs that counter space for her new set of Lustroware Elegante Kitchenkeepers. But check out mom....she is sitting at the built in ironing board, all dressed up and in pumps, dutifully ironing hubby's hankies, but she has her purse on her arm, ala Queen Elizabeth (no disrespect intended). This lady is ready to go, to spring into action, at a moment's notice! And there is sweet and obedient little Sally, playing quietly, waiting for mom to finish. 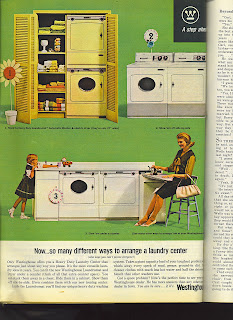 These next two ads surprised me because I did not know that weight loss was such an issue in the 60's. I thought that this was something relatively knew, since the 80's. There was Tab soda and Fresca, but I had no idea that weight loss products were advertised. This one is for something called "Metrecal dietary", but I can't quite figure out what it is. Is it sweetener? Does it have meals like Jenny Craig? Is it liquid like Slim Fast? Did anyone die after ingesting it? 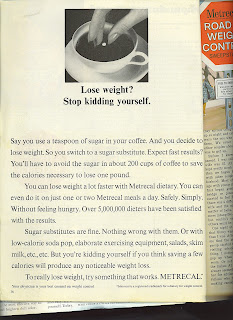 This was the one that was incredibly offensive, so much so that I couldn't stop laughing when I read it the first time. It's for Sego Liquid Diet Food. "Your Slender Figure was Part of Your Charm.....Would he think so today?" Oh the humanity!! Then it says, "Wouldn't you like to win back the tender admiring glance?" Can you believe this? Oh yes, because I'm sure he's stayed the hunk of burning love he was when she cast tender admiring glances his way!! 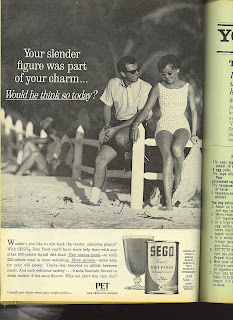 "Baked with a Man in Mind". Because it was, after all, all about the men, back in the day. Yeah, um, no. Stepford Wives of the 60's! Stand up! Take your lives back! Throw out your Sego liquid diet food and tuck in to this chocolate cake instead. 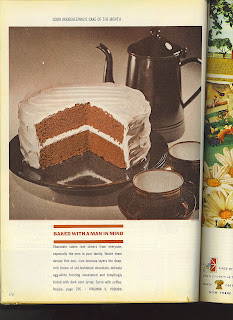