I hope everyone had a nice new years eve! We always stay in, except for the years when we were lucky enough to score tickets for the Grateful Dead in Oakland. It was the show of the year and any Deadhead lucky enough to be among the lucky 15,500 or so souls inside on the big night was revered among those Deadheads who could only stay home and listen to it on the radio. We got to see the last 3 NYE shows the Dead ever performed: 1989, 1990 and 1991. Once the date was announced on the Dead's hotline in October, everyone raced to the post office to get their money orders. Next, we'd go home and lovingly follow the strict mailorder instructions - filling out our names and addresses in the top left corner of a 3x5 index card, with the date of desired show, venue name, quantity and total amount enclosed in the center The envelope had to be stamped, no metered mail allowed. We'd walk the envelopes down to the post office on the first day of mailorder, and wait in line just to watch the clerk hand cancel the stamp. Then we'd go home and check the mailbox every hour of every day for the next month, as if it were a Road Runner cartoon where Wile E. Coyote puts something in the mailbox, stands next to it and the postal carrier zooms up immediately with his package from Acme Explosives.
It had often been said that Bay Area Deadheads were first to get the coveted NYE tickets. Since we had just moved to San Francisco, we crossed our fingers and hoped. The day arrived when we saw our return address stamped envelopes in our mail. We tore open the envelopes....yup, we were going to 12/27/89 and 12/30/89..... and....and.....YES! WE WERE IN!!! There were the giant pink tickets with a skeleton and balloons and party hats!
And what a show that was, too. Bonnie Raitt was the second opening band, and she just smoked. She even joined the Dead playing slide guitar on "Big Boss Man". In 1989 we met some great people. These girls, Kim and Kris, were sitting in front of us and they invited us to sit with them. At midnight, after promoter Bill Graham did his big Father Time midnight show and we'd counted down, Kim produced out of nowhere a bottle of champagne she smuggled in. She was wearing layers of hippie skirts so it was never noticed under her clothes. The champagne was very warm by then but we didn't care. We were passing the bottle while the Dead jammed "Not Fade Away" and the hundreds of thousands of balloons which had been released into the crowd below started popping so loud it almost drowned out the band. Those NYE shows usually ended around 2:00 and after being inside the Oakland Coliseum with 15,000+ of your best friends, most of whom are tripping, since about 5:15 pm it was a paradigm and/or reality shift to say the least!
1990 was also a blast; we went with 3 good friends and ran into everyone else we knew. These were my fave tickets, for the 1990 show. We've had them framed in our family room ever since that night.

And who can forget NYE 1992, when we drove all the way up to Fort Bragg, on the Mendocino Coast, late that afternoon in a blinding rainstorm, me with bronchitus in full swing? I tried to stick it out, but I was way too sick. We ended up leaving the hotel at 2:30 a.m. because of my non-stop, strangling cough. It was still pouring rain as we wound our way through the dark, wet, foggy coastal mountains to get back to Highway 101. There was a 24-hour Chevron station and convenience store at the end of the road, and to this day, we still talk about how that was the best cup of coffee either of us had ever had. We finally got back to San Francisco at 5:45 a.m. and Brian dropped me off at the hospital urgent care.
But this cartoon is more like it for Brian and I now. If you can't read the text, the woman's looking at the clock and it's 1:15, and she says, "Wake up, Brian, we slept through it again this year", and hubby's fast asleep. I changed the name of course.

And this one's pretty accurate too. Yesterday (NYE) after I showered in the a.m., I decided I had absolutely nothing to do so I climbed back in my jammies and stayed that way. 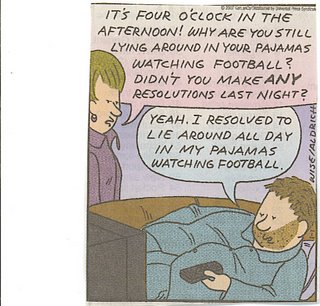