But I wanted to be Saturn

So Brian's downstairs right now, watching "Deadwood" as he does each night. It's not my cuppa tea so I came upstairs to surf around the blogs I visit each day. For some reason, I decided to google "quiz what planet are you" and I got a list of those funny, time wasting quiz things that go around by email from time to time.

There were only six questions and I answered truthfully on all of them. As I was finished, Brian came up to get a beer, and I told him what I was doing. He chuckles and says, "I can tell ya what planet you are, it begins with a U..." and he cracks himself up. I had just clicked on "get results" when he said that and I whipped around to look at him, with a loud, "HEY! Not Uranus!" I turn back to the screen, and there are my results: "Uranus". The big blue planet. I then yelled, "OH NOOOOOOO!!!!!!!" Brian looks at the screen and doubles over laughing, says, "Put that on your blog!" as I put my head on the desk. 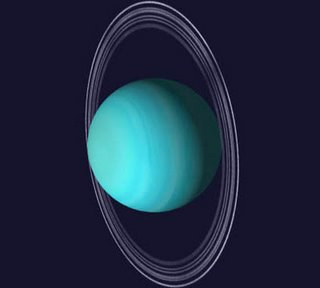 Look, there's a ring around Uranus. tee hee hee I know, that was a really juvenile joke, but someone had to say it. And don't tell me any of you weren't thinking it either!
Posted by JoJo at 9:33 PM