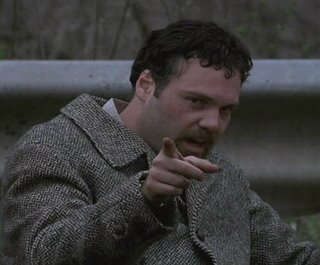 That got us musing about all the amazing actors and actresses Vincent has worked with, and could someone do "Six Degrees of VDO".... for example, what would be the 6 degree link between Vincent and, say, Gregory Peck? OK, maybe that's a bad example b/c Gregory Peck was in "Cape Fear" with Juliette Lewis who was in "Crooked Hearts" and "Strange Days" with Vincent....But you get the idea!
Unfortunately I don't have the time to research this. So I'm tossing out the challenge to my V-Love Gals out there in blog land.
Posted by JoJo at 5:53 PM