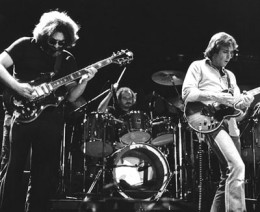 I posted a picture of the Grateful Dead because without them, Brian and I would never have met. He has been a Deadhead since 1978 when he saw his first show in Pittsburgh. He has done extensive travel around the USA following the Dead from place to place over the years. I didn't become a Deadhead till 1987; my first show was in 1988. Brian happened to move next door to another Deadhead, named Jef, who I was dating off and on during the summer of 1988.

At the Dead shows in Maine over 4th of July weekend, I went to Jef's campsite but he wasn't there at the moment. A guy at the campsite said to me, "Do you have an extra ticket for tonight's show? It'll be my 85th show". I said, "Actually I do have an extra ticket" and he said, "What do you want for it?" and I said, "$20, what I paid" and he said, "I love you!" That was Brian. He and I became really close friends, even while Jef and I dated more seriously during the early winter of 1989. Then it hit me, I was in love with Jef's best friend!! Then I found out Brian had been carrying a torch for me since before Christmas!! Jef was totally cool about it, thought Brian and I would make a better couple. So Brian and I eloped on June 27, with Jef as my "Man of Honor", my friend Holly as "Best Woman" and Jef's then-7 year old daughter, Alicia, as "Flower Child". We honeymooned on Dead summer tour w/ Jef and Holly for 5 shows. Jef's still one of our dearest friends in the entire world, although I feel ancient now that Alicia has married and started a life of her own; I still think of her as 7.

When we got back to Cape Cod after tour, we loaded up a UHaul and hit the road for San Francisco. It was a fantastic trip across the country; we had such a great time. We arrived in SF, found an apartment right away, and moved in on July 31, 1989. That's when we officially started our life together and what an amazing ride it's been!

My parents were really really mad at me for eloping, but I couldn't see any other way to have the wedding that I wanted. I am from a big Italian family and have been to my many of my cousins' weddings. The thought of having to do that, being on display in church wearing a white gown in front of tons of people was terrifying to me. It's just not me. My parents also would not have been on board with my saying, "by the by, I'm getting married today, care to come along?" So I made the decision to elope and I have no regrets. The kind of amusing thing is that I'm sure a lot of family and friends whispered to each other, "it'll never last". Guess I had the last laugh after all.

So happy anniversary honey! I love you heaps and bunches!
Posted by JoJo at 2:38 PM