Little Stories from the Prairie

Like most women of a certain age *ahem*, I grew up both reading the Little House books by Laura Ingalls Wilder, and watching the TV show.  Being the same age as Melissa Gilbert, I absolutely adored her and wore my hair in 2 braids at the end of my elementary school years (and still do around the house and to bed).  I also grew to despise that awful, spoiled, mean old Nellie Oleson!  I was always delighted when she got her comeuppance at the end of the episodes!

Of course everyone's since grown up and it's been a well established fact that not only is Alison Arngrim a gifted comedian, she is actually one of Melissa Gilbert's best friends, even from the first day they met on the Little House set.  Just goes to show you how good those little girl actresses were!

I decided to pick up Alison's book, as it's gotten really good reviews. 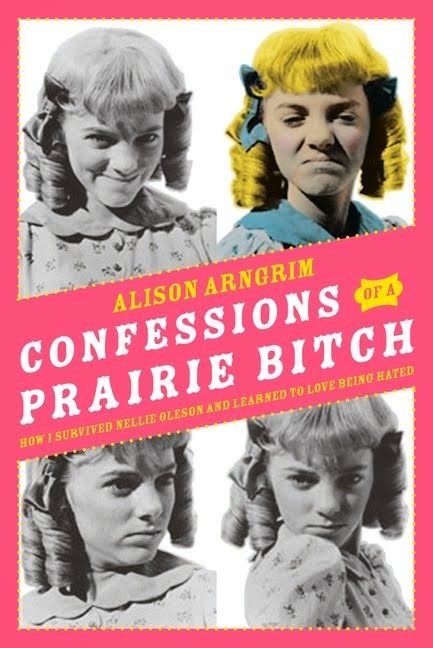 Alison Arngrim is very, very funny and engaging.  I completely enjoyed her writing style and I could hear her voice in my head as I read it.  She sounds like just the sort of person I would love to have in my own circle of friends.  While she came from a showbiz family....albeit a rather unconventional one....she was far from the wealthy, spoiled, privileged child she portrayed on Little House.  There were times when her family relied on her to help out with buying groceries because they were coming up short financially.

Alison's faced some pretty bad times in her life....let's just say that her brother is a disgusting predator and the fact that she came through it with her humour and wits intact is a miracle in and of itself. Hollywood chews up and spits out child actors, and with what she was going through at home, I don't think anyone would have been surprised if she'd gone down the road to drug and alcohol addiction.  But she did not.  She became a stand up comedian and champion in the AIDS cause.  I'd love to meet her someday; I know it's unlikely, but it would be cool.

Pick up the book; it's a great read.  I couldn't put it down.

And since I'd just read "Nellie's" book, I decided to get "Laura's" as well. Melissa Gilbert actually was the one who grew up in a well off, prestigious Hollywood family.  Her grandfather was loved and respected by all the Golden Age greats - Frank Sinatra, Milton Berle, Sid Ceasar....my god she grew up calling Dean Martin, 'Uncle'!  She was acting by the time she was a toddler, landing commercials and bit parts on the TV shows of the late 60s and early 70s, before getting her big break in Little House.

Melissa's book is also a good read....although I have to say it probably should be retitled "All the Famous Guys I've Slept With".  Let's just say that Half Pint was no goody-goody by any stretch of the imagination, and any thoughts I had about what horrible, cheating dogs her ex-husband and many boyfriends were...well...those went right out the window as it appeared to have been quite the two way street.  I was pretty shocked that she didn't divorce her first husband on the spot when she got up to feed their baby son one night, and found her husband having sex with a hooker on their couch!

She's very candid about her substance abuse issues, relationship fiascos, her search for her birth family, etc.  Still, I have always loved and admired her and I still do.  Interesting to note, however, that this book was published a few years ago when her marriage to Bruce Boxleitner was going strong.  Needless to say that I was absolutely stunned when I found out that they'd divorced in 2011 and she had remarried Timothy Busfield after a three month engagement in 2013.  I hope that she has finally found happiness with Timothy because to be honest, I didn't like a lot of the stuff Bruce put her through, and I remember thinking back in the 90s that he wasn't right for her.  He was too old for her, and he didn't want the same things, even going so far as being angry that she got pregnant!  I guess after 16 years it finally came to a head.

I admit to getting very emotional quite a few times, esp. she discussed her relationship with Michael Landon and his passing.  I had grown up absolutely adoring that man, first as Little Joe Cartwright, then Pa Ingalls, and I was devastated when he died in 1991.  Melissa has also done wonderful work for and with terminally ill children, and in fact that seems to be her real calling in life.  I wouldn't be at all surprised if she devoted herself full time to that cause.

Both books are really entertaining and I am glad that I picked them up.  If you grew up with these women like I did, I think you'll really enjoy them.
Posted by JoJo at 7:00 AM