I pinned this picture from Pinterest, of what looked to be an easy glass painting project, creating a Moroccan-style lantern out of a regular jar, puffy & glass paint or dyed Mod Podge.  I found this link HERE on how to make it.  I was, however, skeptical about the dyed Mod Podge technique, having tried something similar last year that failed.  I also knew I'd never be able to make this elaborate of a design!  This is awesome. 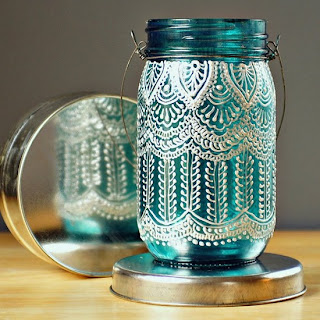 I went out and bought some gold puffy paint, which happened to have glitter in it.  I wasn't sure I necessarily wanted this particular project to be glittered but once it dried, I liked the way it looked.  I had to free hand this and it Wasn't. Easy. 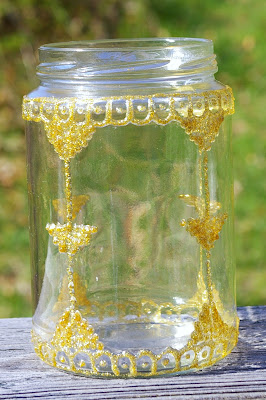 Thus, began four days of trial and all error, trying to paint the inside of the jar, which I decided to do in aqua, like the jar in the top picture.  Of all the examples I've seen in red, yellow & aqua, I liked the blue look best. First I started with Martha Stewart's translucent glass paint, and I even checked her website and read tips for using it before I started.  It was so incredibly runny that I stood out in the sun and wind for a half hour, turning and turning the jar, hoping the damn paint would start to coat the glass and dry.  I got sick of waiting so I put it upside down on paper towels to drain.  When I went back out, there was NO colour on the inside of the jar, it had all drained out.  I was pissed.  Her paints are expensive.  Do NOT waste your money on them....I bought a set of opaque and those suck too.  I tried again, using a little less paint but then it all pooled at the bottom.  Then I thought, OK, I'll just have to do this in 'stripes', laying the jar on it's side and squirting a line of paint from back to front, so that it dries the deep colour I wanted. It'd take a long time but I was willing to give it a shot. Well the two test stripes came out all uneven too.  Fortunately, I was able to peel the whole fiasco out without it sticking to the glass.

I bought Gallery Glass Paint in turquoise, figuring that was close enough to my colour goal, and encountered the opposite problem.  It was too thick to run at all.  And by the way, using a paintbrush to spread it (or the Martha Stewart paint) around left terrible streaks.  I have a few glass painted pieces I've done with a brush and streaking is unavoidable.  I found the Gallery Glass Paint blog and inquired if I was supposed to dilute it.  They got back to me quickly and suggested I try sponging the paint on, and doing several coats till I achieved the shade I wanted.  OK, I got out my paint sponges and again, I ran into a streaking or stippling issue.

This damn project literally had me up at night.  I would wake up in the middle of the night and the first thing across my brain was, 'how can I salvage this project?'  I should have been taking pictures of my fails but I just didn't feel like it.  It was getting tedious enough as it was without stopping to do photos.  I was also using a test jar for most of these experiments because I didn't want to risk a permanent mistake to the decorated jar.

Sooooo I went back to the original link, posted above, and tried the dyed Mod Podge, mixing it with some water to thin it a little and not as much as Martha's, putting green & blue food dye in, pouring it in the jar, and then placing it upside down on a cookie sheet in the oven to start to dry.  Yep, it all ran out again, leaving the jar with just a faint hint of colour.  I have researched the dyed Mod Podge on a few sites and either I am doing something wrong, or these people are full of crap.  It doesn't work, at least not for me.

By this point I'm ready to hurl the bloody thing, but it took so long to freehand that damn gold design, and I did like the way it came out, so I just went a whole other way with it.  I got out the red glittery glass paint I bought a couple weeks ago, and hand painted the scallops.  I also decided to bring the gold paint all the way to the top.  Perhaps if I had been able to get ahold of the recommended glass paint, Pebeo Vitrea 160, I could have done the aqua inside, but it's only sold on line and I just didn't feel like waiting, and none of the craft stores around here sells it. 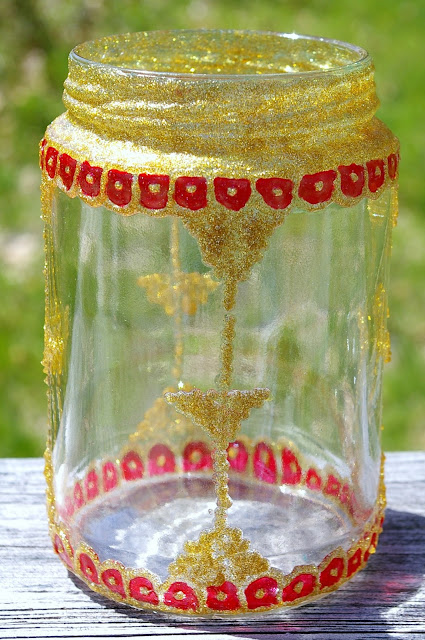 I did like the suggestion of using epsom salts in the bottom for the candle to sit in. 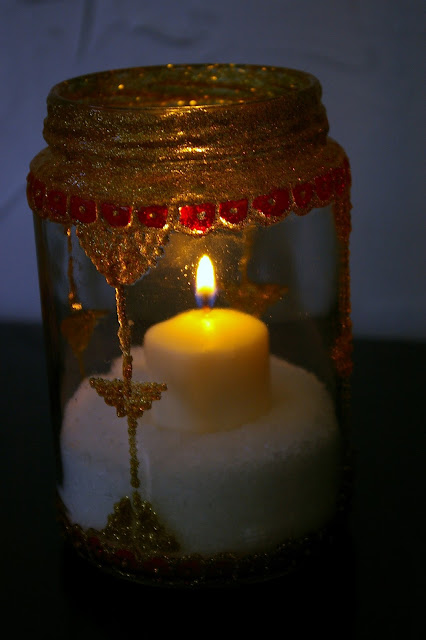 I also scraped off the acrylic confetti paint dots I put on these glasses a few months ago, and redid them with glitter glass paint.  I like how these came out way better too. 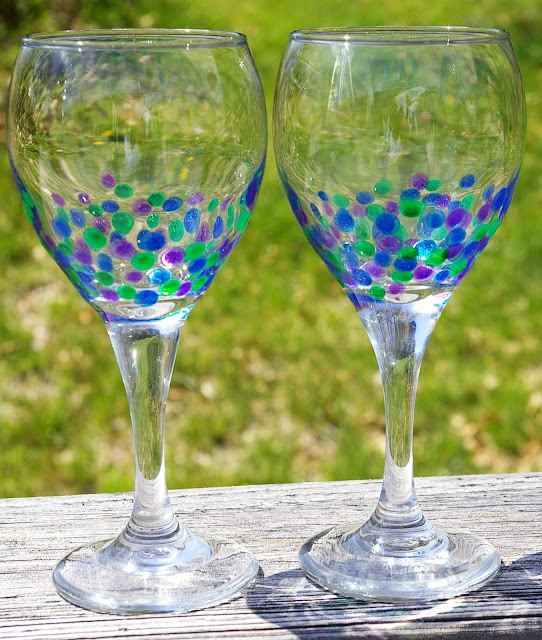 If I still had the receipt for the set of Martha Stewart paint, I'd return it to Michael's and get my money back. But I figured it would be good or was the best, because her brand of craft supplies is literally taking over.  I find that unfortunate.  She's pushing out a lot of other brands and I don't find her stuff to be all it's cracked up to be.  Just because it has her name on it doesn't mean it's any good.  My plan is to get ahold of some Pebeo Vitrea and try again.
Posted by JoJo at 7:00 AM