You know it's true what they say that the quest is always more fun then finding what you are looking for.  On the other hand it's nice to have some of life's little mysteries resolved.  This happened recently, kind of.

When I was in kindergarten, we had split sessions.  For the first half of the year, I was on afternoons and the second half of the year, on mornings.  This is my kindergarten class picture.  I know every name by heart, including the kids who moved away after the first year or so together.  My memories of kindergarten itself have faded....just a few fragmented images here and there remain.  Extra points if you can find me.  ;-) 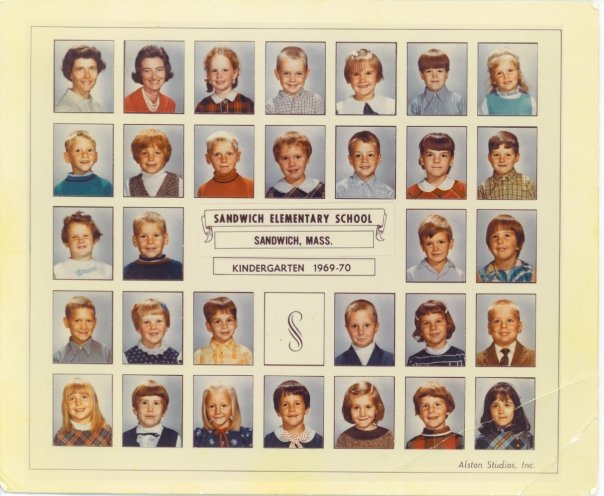 I knew there were kids in my grade who were on the opposite schedule as me, but I never saw their class picture.  I didn't think about it back in school....I mean why would I ever ask anyone to see their class photos?  Flash forward to the present and now that my classmates want to see them, no one can find them anymore.  Most people's parents retained the class photos and after moves and deaths and divorces, many have been lost forever.  I was lucky that my mom kept them and let me have them when I got out of college.


I was on Facebook and stumbled upon the corresponding photo to mine, completely by accident.  It solved some of my questions on who all else started from K and graduated with me in 1982.  It also surprised me because some of my fragmented memories of K are of the girl 4th from the left in the 4th row in the blue jumper, Beth.  I could have sworn she was in my session, even though her pic wasn't included in my class pic.  All these years I assumed she moved to Sandwich during the year and after the photos were taken.  Instead of a group shot, our K class photos are a compilation of our individual school photos, which were always taken in early September, when students were still transferring in and out.  According to this photo, it's clear our paths never crossed during K, despite my memories.  The other thing is that while some of the kids are easily identifiable to me, some of them are not.  I wonder who they are?  The photo on Facebook wasn't tagged with the names.  And who is the sad looking little girl in the bottom left corner?  Do I know her?  I can't tell.  Could she be a girl that I thought I met in 2nd grade?  The boy on the far right middle row looks familiar....I thought it was my friend Doug but he insists it's not him. 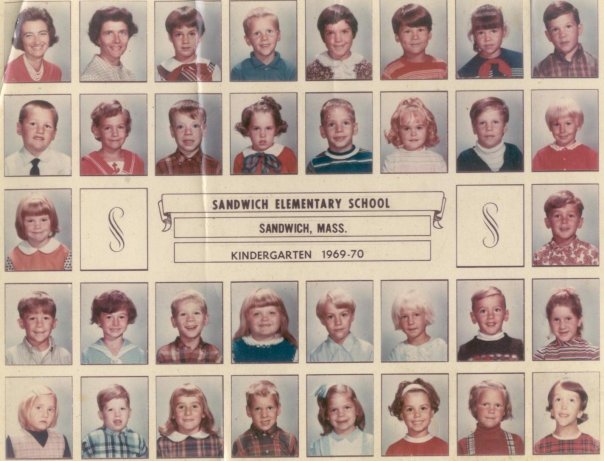 In 2nd grade, the town was experiencing significant growth, so halfway through the year, a bunch of us were removed from our original classrooms and placed into an expansion class.  A temporary classroom had been built in a very noisy hallway right smack in between the elementary and high school parts, and my new teacher (back row far left; our teacher's aide, on the right, was awesome) was unable to retain control of our room and she was also cruel.  Because it was so disruptive to be ripped from my original class and placed into utter chaos with students I didn't really know, I have way more clear memories of January to June 1972, than I do of September to December 1971. As a side note, my parents always pinpointed my plummeting math ability to when I was changed to this class, due to the disruptions.  BTW, that's not my underwear showing, it's the white slip under my dress. 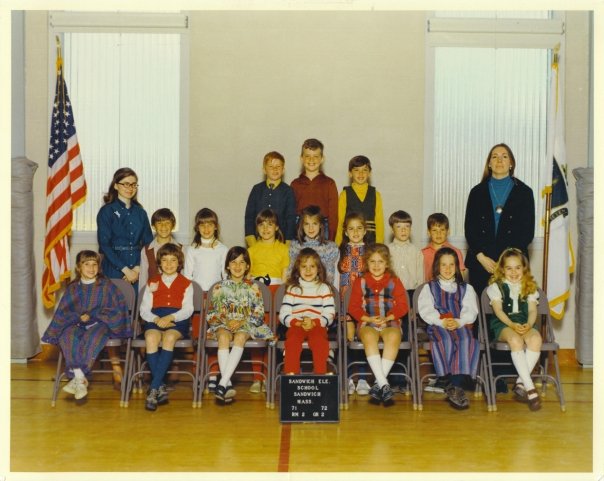 I've always wondered about the photo from my original class.  I thought that it would help me to recover memories of the first half of that year if I could just see the picture.  Unbelievably, the person who posted the picture of the K class, also posted a picture of my original 2nd grade classroom!!!  Again, I can ID some of the kids, but where is Traci? I clearly remember being in trouble w/ my teacher....something about having done an assignment wrong....and I at my desk, very upset and trying hard not to cry.  She sat in front of me, and I remember her turning around and doing what she could to cheer me up.  Yet she's not in this photo, and she wasn't moved into the expansion class with me either.  She was, however, in my 1st grade class pic....could I be remembering something from 1st grade?  And I remember there was a girl in 2nd grade named Wanda Brannikins and she had almost white blonde hair, and there is no such girl in this picture, but could possibly be the blonde girl 3rd from the left 2nd row.  I remember the boy on the far left 2nd row but I don't remember his name.  And Beth is in this classroom, so are my alleged K memories of her really from 2nd?  I also seem to remember that my first 2nd grade teacher didn't like me; I still have my report cards from back then and she never had anything nice to say about me.  I've always wondered if that's why I got transferred. 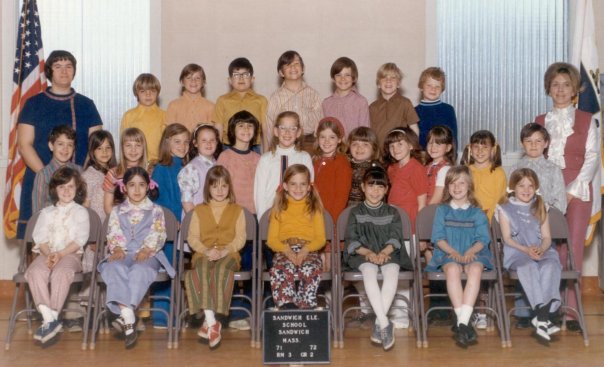 The Class of 82 started in the Fall of 1969 with only 61 students.  When we graduated, it had swelled to around 150.  There are approximately 32 of us, that I can positively identify, that made it all the way through together in the same school (2 of the original 61 studets were held back a year).  My bff since K, Sheila (2nd from left front row, dark hair) moved to Orleans during 3rd grade and was also class of 82, but at Nauset High.  A few of them made it as far junior high before moving or possibly transferring to Upper Cape Regional Technical School.

So many moved away and I wonder what happened to them, if they remember their time in Sandwich at all and if they look at these class photos and remember any of us?
Posted by JoJo at 7:00 AM