X-Files: The Truth is Out There 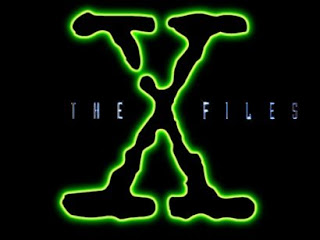 I loved the first four seasons of The X-Files.  As is my usual 'MO', I come to shows a little bit late, so I didn't get into X-Files till a couple of years had gone by.  My cousin Diane had developed a HUGE crush on David Duchovny and she was after me to watch the show.  She sent me a VHS tape of 6 hours' worth of episodes.  I watched the first one and was hooked.  That was a marathon day, watching all 6 hours right in a row.  When I was done, I called her and said, "MORE! NOW!"  She dubbed off a few more episodes for me, to catch me up, while I began watching each Sunday night.
I joined the fan club too.  It came with this I Want to Believe poster.  That was really the main reason I joined the fan club, to get the poster. 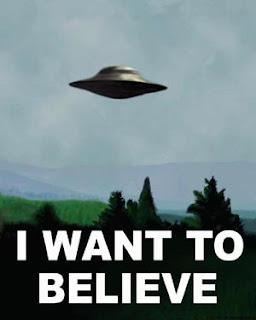 The scenery in the episodes was awesome too; I found out it was shot in and around Vancouver, BC.  Although I must say, the PNW region made for a very poor stand-in for episodes that took place in Marin County (where I was living when I watched the show) and Massachusetts!!!  There was one episode, "Ascension", where Mulder is in a gondola going up the mountain and his nemesis, Alex Krycek, stopped the ride, stranding Mulder & leaving him swinging high above the ground.  He climbed out the top and climbed the cables to get to the top.  It was supposed to be set at the fictional Skyland Mountain, in the Blue Ridge of Virginia, but there was all of Vancouver and the Strait of Georgia, far below, as seen in this picture: 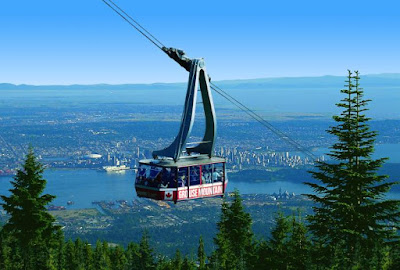 Ain't no way that realistically could pass for Virginia!!  For one thing, you can't see water from the Blue Ridge Mountains.  But I digress.
This was my pumpkin, Halloween of 1997 in Fairfax, CA. 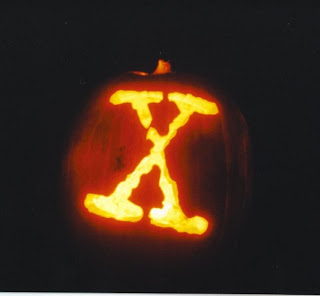 Put it in the front window with the purple lava lamp and Tesla Coil Ball.  It looked wicked cool but I think we got a grand total of 4 kids that night. 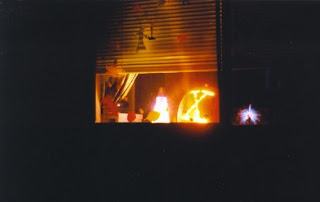 I thought the show was on the way to jumping the shark after Season 4.  They moved the show out of Vancouver to Los Angeles which totally changed the look.  Gone were the foggy, primeval, creepy forests , lakes and streams.  They never made any attempt to explain what happened to Mulder's sister Samantha, or what happened to Scully when she was abducted.  The movie came out and I went to see it, and I left as confused as when I went in.  It was like, Come ON already!  What happened to Samantha? Was it really aliens? Or a government experiment in cloning based on alien technology?  I never did find out if that was resolved.
Still, Gillian Anderson and David Duchovny had amazing chemistry on screen, but off screen they weren't friends and barely spoke, yet on the show I really thought they were gonna get together.  Skinner was great, although he pissed me off more than once.  The Cigarette Smoking Man was one of my faves, so was Krycek.  But then David left, Gillian's role was greatly reduced and no offense to either Annabeth Gish or Robert Patrick, both of whom I love, the show just lost everything about it that made it so great.
I have lots of fave episodes, it's too hard to pick just one.  They were all pretty awesome, those first 4 years.  "Home" is the one that sticks out the most, from Season 4, because it pushed the envelope so much that it's rarely ever broadcast as a rerun.  You can read about it HERE.  I've watched it a couple times on the DVD, and let's just say that I'll never be able to hear Johnny Mathis' "It's wonderful, wonderful" the same way again.
Did you like the X-Files?  What was your fave episode?
Posted by JoJo at 7:00 AM

Labels: Blogging from A to Z Challenge, X-Files