Not that anyone from off-Cape or outside Eastern MA would get either of these photos, but they cracked me up just the same.  If you are from Sandwich, this map is extremely accurate.  It's the blue area under "Canal Cup".  I live on the border of Hillbillies/Tourist Swine now.  My favourite is 'Olive Garden and Crime' for Barnstable/Hyannis.   There have been several great white shark sightings off Chatham, hence the "Jaws & Yuppies". 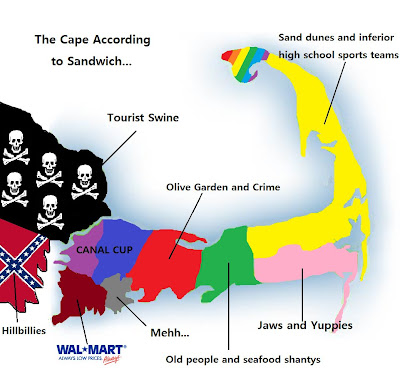 I've taken a lot of teasing about my hometown from people who have never heard of a town called Sandwich before.  Knowing the history of the town and it's naming after The Earl of Sandwich, England, it never seemed like that funny of a town name.  But to people on the west coast, it is, apparently, a hoot.  And I've heard them all.  "You're full of baloney! GET IT?  Sandwich? Baloney? BWAA HAA HAA" as I stand there, stonefaced, "Mmhmm. So anyways...." or "Yes I grew up in East Sandwich and yes it's over by the crust....funny ha ha..." *rolling eyes*
This illustration of our villages appeared on the Sandwich, MA Facebook page the other day and it made me laugh, even though they messed up the placement of S. Sandwich and Forestdale. 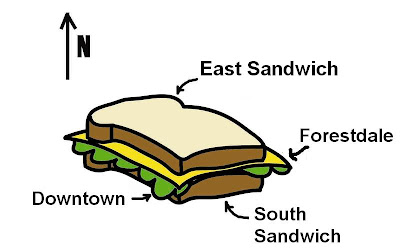