"Nothing is impossible to a willing heart"   That was inside a fortune cookie I got recently, and which I saved.

I haven't been around the blogs much because I have been preoccupied with a very pressing personal matter since around the 19th of the month.  It's widely known on Facebook what's been going on, but because I prep several blog posts in advance, which publish every other day, I haven't talked about my frantic search for help, stress and major waiting game that I've gone through over the past week or so.
My ex is very sick and barely able to take care of himself, much less an animal.  He called & emailed me that it was time for me to take my sweet little furchild.  I always said that I'd spare no expense, and move heaven and earth, to get Sagan from WA to MA, because going to a shelter or back to the GSD Rescue was not an option.  So that's what I did.
(This photo was taken a few years ago in Washington) 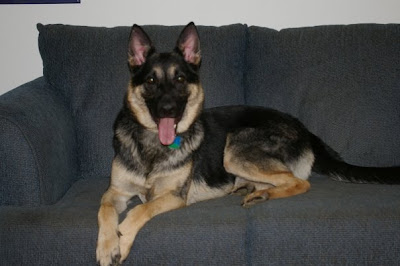 That's right!  Sagan has come to the east coast to live with me, Pepper and my sweetie!!  The rescue, travel arrangements and planning have been stressful, to say the least.  Add to that, Western Washington had a huge snowstorm followed by an ice storm, making travel in that area next to impossible.  Brian was going to the hospital on Friday, 1/20 and Sagan needed to be taken out of his apartment.  Out of sheer desperation, I did a shout out to my Pierce County friends on FB to see if there was anyone who'd be willing to risk the roads to get Sagan from Tacoma, to board at Sumner Vet.  My friend Jody came through w/ flying colours.  She stood by waiting for my call that morning and got there just in time for the Fire Dept. to allow her inside the apartment to get my baby.  She texted me a photo of Sagan in her car on the way to Sumner.  I was a basket case that whole weekend, making call after call to arrange his flight, get him his travel supplies and travel exam while he is boarding.
I truly do not know what I would do without my friend Debby, who purchased a new crate, bedding and travel bowls, and who also picked him up at the vet the night before the trip and brought him to SeaTac Airport the next morning to see him off.  If Jody and Debby hadn't stepped up to help, I would have had to fly to Washington and do all this on my own. A thank you is also in order to Deb's friend Mary who drove Deb and Sagan to SeaTac in the early hours on Saturday morning.  I also owe a huge thank you to my friend Laurie who volunteered to bring me to Logan Airport on Saturday night to complete the rescue mission and reunite me with Sagie.

I was somewhat distressed at how thin he is...I can feel his spine and his face is drawn.  His ears are red and a little raw from his scratching (it's a tick he's had since puppyhood).  I don't think my ex has taken good care of him, esp. not in the past few months.  He came in the house and vacuumed down Pepper's kibble in her bowl before I could stop him, then promptly threw it up.  It will take some time to make him feel comfortable and calm.  You can tell from this photo how thin he is as compared with the one above.
In the house an hour and already stole my chair! 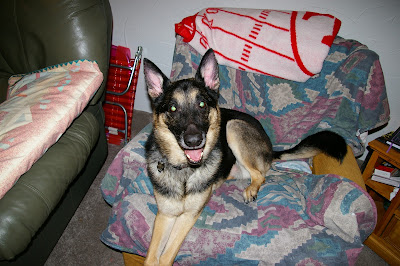 I also want to thank my family and friends for all their good thoughts, inquiries, prayers, karma and support, and to those of you who spied on Brian's FB page to determine what he was up to.  It was a looooooong damn week waiting and waiting, hoping that Brian didn't screw me over and take Sagan out of boarding.  My calls to Sumner Vet to check on him were all positive, but they did caution me that they could not refuse to release Sagie to Brian b/c he was still on the account.  That left me on tenterhooks for the entire 7 day wait, hoping the phone wouldn't ring or I'd get a message in my email or on FB saying that Sagie had been sent back to Brian.

I also owe a debt of gratitude to Sumner Vet for caring for my boy this past week.  I paid for 'pampered grooming' because only the best for my baby.  And another thank you goes to Alaska Airlines for their help, their pressurized and climate controlled cargo hold and the crew in both Seattle and Boston who were all good to my boy.
He remembers the smell of this bed.  Not sure what he's looking at. 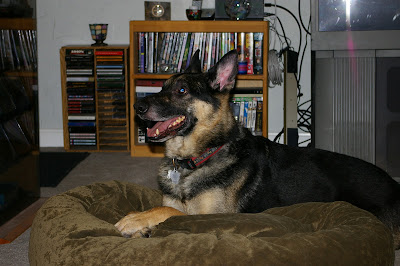 Finally, I do not know what I would have done without my squeeze's love, hugs and unwavering support.  He has been my rock throughout this.  He's had a lot of helpful suggestions and ideas for Sagie's transition, and is going to build a fence in the backyard so that I don't have to take him out on a lead every time.  I know that having my boy come to live with us means that we can't get the beagle puppy that he aches to have.  That he is sacrificing what he wants because he wants me to be happy speaks volumes about the kind of man with whom I am spending my life.  When I got the happy calls from Debby that he was first at her home, and then at the airport, he came up to me and held me close when I was on the phone, whispering 'Congratulations on getting your dog back baby. I love you.' in my other ear.
Pepper is one maaaaaad doggie. 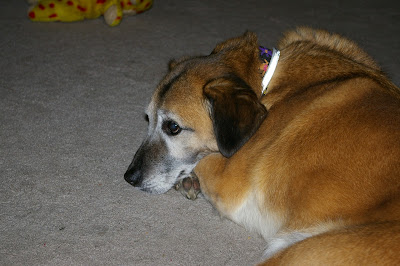 I'm sure there will be a period of adjustment, especially for Pepper, who likes being an only dog, and my mom is very nervous about my bringing a GSD over to her house, but I'm sure once everyone meets him and sees what a sweet, affectionate and friendly "little" guy he is, all fears will be put to rest. 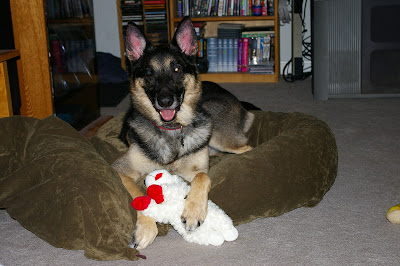