Friday, July 16, dawned very cloudy and foggy. I was glad that we'd had such clear weather the day before. I met Joe at his hotel and we walked over to Westlake Center to get the monorail over to Seattle Center. We had planned on going up to the top of the Space Needle, but in that weather, there was no point in it. We were glad we went up Smith Tower on Thursday!
Seattle Center was where the 1962 World's Fair was held, so it's got a real 'Jetson/Space Age' look. Very retro. One new, and controversial, building in Seattle Center is Microsoft Co-Founder Paul Allen's Experience Music Project. I didn't take this picture, but this is what it looks like from above. It's supposed to look like smashed up guitars and instruments. 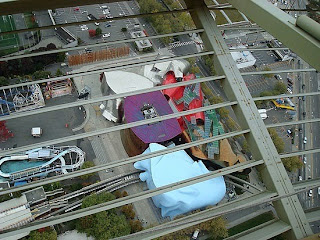 It's a crazy looking building, but it's a photographer's dream. Paul Allen has contributed a lot to Seattle, and because of his vast fortune, he is able to indulge in his teenage obsessions. EMP was built in homage to Jimi Hendrix, and I do want to check it out sometime. I hear it's a very interactive museum and there are lots of great exhibits. Paul Allen also houses his Science Fiction Museum at EMP. He owns the Seattle Seahawks & funded the building of Qwest Field.
We wandered around the Comcast Bite of Seattle. Everything smelled so good!!! Unfortunately I am not terribly skilled at walking while holding, and eating off of, a flimsy plate loaded with food. I did get some crispy chicken, which was so delicious but very rich and filling! My friend Debby was a finalist in the Beringer Bros. Winery Great Steak Challenge contest on the Food Network, so she cooked at The Bite on Saturday.

I had to leave a little earlier to get a jump on the Friday traffic, so we took the monorail back downtown and hung out for a little while before I left for home. I just want to say thanks again to Joe for coming up here to see me and playing tourist!! It was a blast!
And now that I know my way around a little bit better, I am more inclined to go up there and return to visit EMP, the Sci Fi Museum and do the top of the Space Needle!
Posted by JoJo at 9:15 PM