Thought I'd check in with a 'real life' update since I haven't done one for awhile:

OK, just kidding. But nothing really is new. Work's still nuts, trial on Wednesday, boss working all weekend (3-day in the States to observe Memorial Day), my desk will be a horror show on Tuesday. Brian's still trying to find work but it's been almost 2 years now. I have given up on trying to fight the change in everything because this is clearly going to be 'the new normal'. There's no point in fighting it anymore. It's either adapt or die from the stress. That's why I've been a crafting maniac over the past few months. I've probably done more crafts & jewelry making since January than I did in all of 2008 & 2009 combined.

During our last year in Fairfax, when things with the horrid neighbor from hell were hitting a crescendo, I was making complex beaded Christmas ornaments (the kind on the silk balls using pins, sequins, ribbon & beads) like a madwoman. It was the only way I could cope with the miserable 'always-waiting-for-the-other-shoe-to-drop' weekends we endured. I made nearly 20 of them in less than a year. That's how stressed I was. I'd work on them for hours and hours and hours to distract from the dance music she insisted upon blasting all weekend long so that we couldn't even hear the fucking TV. It was either that or find myself arrested for assault because it was getting to that level. So, I figured I'd better throw myself back into crafts to cope w/ the current stress before I find myself in the hospital.

I took Friday off in order to have a 4-day weekend and have tried to make the most of it craft-wise. So far I finished the last 4 pages of a mandala colouring book I started in January, 2009. I did at least 1 to 3 pages per week, every week. I finally got around to shooting all the jewelry that I will list on Etsy and segregating them from pics of my personal necklaces, which are not for sale. Also restrung the last couple of chokers to a longer format. Try as I might, I just cannot get used to be strangled by them. I don't wear turtle necks either. Today I made 10...count 'em....10 necklaces! Mostly of natural stone beads. Unfortunately I forgot the names of some of the stones, but they are coming out pretty good. I have another necklace designed on my board and can't decide if I am too tired to make one more or if I should just do it. When I have a craft ready for assembly, I obsess over it. I'll be thinking about it all night. After the natural stone ones are done, I will delve back into the crystals and sparkly Czech glass that I love so much!!

At least we've been having a fabulously cool and rainy last few days, with more to come. Wednesday's forecast apparently also qualifies as a 'winter storm' because the snow level is dropping, but we won't see any at our house. 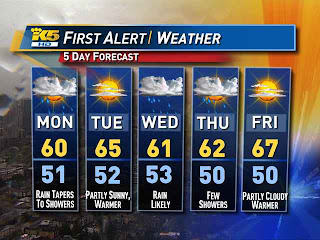 Not that I mind, or anything. I'm proud to be a mossback. I figure, the longer it stays cool and cloudy, the shorter the summer. It's bad enough that I have to suffer through the goddamn neverending light this time of year. At least when it's cloudy, it helps dull the brightness, so that you don't walk into the kitchen and have your retinas burned to a crisp. I could not deal with living in Alaska. I'd kill myself if the sun never went down. Many of my most disturbing dreams seem to be set in the middle of the night, yet the sun is up in these dreams, and it creeps me out. I can't imagine actually having the sun up in the middle of the night. Still, it's really hard to keep up with the lawn mowing with weather like this. It took Brian about 4 days in a row to chip away at it, since we really can't afford Mr. Vu's yard service to come here on a weekly basis.
Oh, before I forget, I was visiting over at Silkie Sue's blog yesterday and I encountered one of those Asian language messages in the Comments. I've seen them from time to time around the blogosphere and assumed it was just some stupid spam. And I was right, it's definitely spam. But last night for the first time, I noticed a 'translate' box at the top of my screen. I don't know if that is a new Blogger feature or Google Chrome feature (my preferred browser) or what, but I'd never seen it before. So I clicked on it and and it translated the message to English. My jaw dropped and eyes bugged out as I read an ad for 'Japanese sluts' and other unsavory Japanese-themed hardcore porn. The internet sure is full of a lot of dark places...
I'm still playing on Facebook but not as often. I jettisoned all but 4 games. I still enjoy Pet Pupz the best. Here's my little guy, Sirius' World. I've decorated more since the last time I posted his scene. Sirius turned 2 on April 29, and has a whole bunch of shiny badges for all of the different daily contests & achievements. Ya gotta click on the pic to get the full effect. The brightest stars in the sky form the Canis Major constellation and the Sirius star is the top center brightest one. He's such a cutie. I can't believe how attached I am to a virtual dog.

I am so sad that Dennis Hopper passed away. I have been a fan of his since I was a kid. I remember him being a guest star on a lot of shows, like "Bonanza" among many others. When I was in high school & in love w/ James Dean, I spied Dennis in both "Rebel w/o a Cause" and "Giant". He also had an uncredited bit in the The Monkees Movie, "Head". Of course his big break came with "Easy Rider", which I really enjoy watching till the unexpected and very grim ending. His turn in "Blue Velvet" scared me so bad that I've only seen it once. He was in some of my fave alltime movies like "River's Edge", "Hoosiers" and "Flashback" which if you haven't seen, you MUST. It's just a hilarious and sentimental look back at the late 60's with a cast of thousands. Dennis & Kiefer play off each other really well. Kiefer loved working with him so much, that he asked Dennis to play the uber villain in the first season of "24". "River's Edge" is an excellent movie too, very dark and sinister, yet you find yourself adoring Feck, the one legged, former biker, uber paranoid, pot dealing lowlife who is in love with his girlfriend Ellie. Did I mention that Ellie is a blowup sex doll? Dennis Hopper is one of the only people who could pull off that role. Then he goes on "Saturday Night Live" and spoofs the blow up doll in a very memorable skit.
I knew Dennis was sick and that his death was imminent, so it didn't come as a complete surprise. I was glad they got him a star on the Hollywood Walk of Fame last month. He deserves it. Should've gotten it long ago. R.I.P. Dennis. You were one of my fave actors for nearly 40 years. 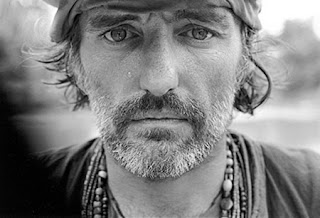 And R.I.P. to Gary Coleman too. He was a troubled soul and he's finally at peace. Sad how all 3 kids from "Dif'rent Strokes" had their difficulties transitioning to adulthood. Todd Bridges seems to have his act together now though.
Tomorrow is Memorial Day. When I was a kid, there was a parade in downtown Sandwich. I marched it in the first time with my Bluebird Troop when I was about 7. After that I was a spectator for most years, then marched in it again as the color guard for the SHS band. The parade stopped at 2 war memorials & library for the gun salute (blanks of course) and moment of silence/taps. My friend Marybeth's dad was one of the Honor Guard, and she and I would scramble to pick up the warm, spent shells from behind the line. They weren't really good for anything, but we liked picking them up. Let me tell you, there is nothing quite like a hometown parade in smalltown America. It's cool now, but in the 70's.....well, it was just quintessentially American. For one thing half the town was marching or participating in it, the other half were friends & relatives taking pictures of their loved ones.
This is Exit 4 of the Mid-Cape Highway (Rte. 6) in East Sandwich on Memorial Day 1978. Traffic would get backed up 15 or more miles from the Sagamore Bridge, trying to leave after the long weekend. It was a popular past time to go to the overpasses and wave goodbye to the tourists. These poor bastards are 6 miles from the Bridge, and the back up stretches for many miles to the east, well into Barnstable and Yarmouth. Dig those classic gas guzzling American boats. 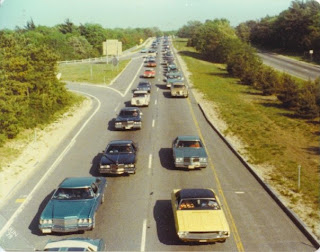 Memorial Day Parade 1979, Jarves Street, Sandwich. In the top left pic are my friends Sandy, Holly & Lisa, top right is Renee, bottom left is Marybeth, bottom right is the Lions Club and my dad and Uncle Dick are marching w/ them. 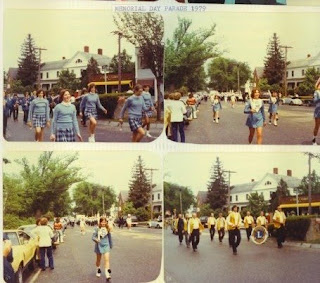 The meaning of Memorial Day has been lost with travel plans and mattress sales, but we should take a moment to remember our vets. Here's my dad and Uncle Dick, taken in Yonkers in the 40's. 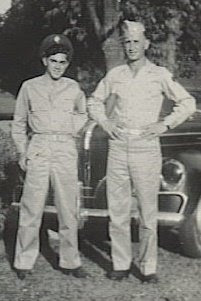 I'll soon post some pics of my new creations, and all the chokers I restrung, for those of you who haven't seen them posted on Facebook.
Well, I'm going to try and hit the hay somewhat early tonite as I'd like to get up early tomorrow. As much as I love sleeping till 8 or 8:30, I do not want to waste my last precious day off sleeping!! So many crafts, so little time!
Posted by JoJo at 10:02 PM