I loathe having my pic taken. But I was less self conscious about it in the 80's and here are a couple pics of me I actually like. They were taken in the summer of 1987, at my friend Peggy's condo in Mashpee (the next town over from Sandwich). The party was mostly people who worked at Channel 58 in Hyannis.

My friend Nigel posted this one on Facebook. Left to right are Nikki Atkins, Nigel Atkins, Paul Shea and me. Nikki and Nigel were still dating in '87 and married in the early 90's. I've known Nigel since the summer of 1983 when I worked at radio station WOCB, in Yarmouth. Nigel was the engineer there and also at Channel 58. He's from England and one of my fave people in the world. Nikki had interned at Channel 58 in the summer of 86, which is when I was hired (although I interned there in 1985 too). And from the "small world department", Nikki went to an exclusive boarding school in Western MA with one of my best friends from Sandwich Elementary School, and is best friends with her to this day. Paul also worked at Channel 58 in the advertising dept. He was like a big brother to me. Really great dude. 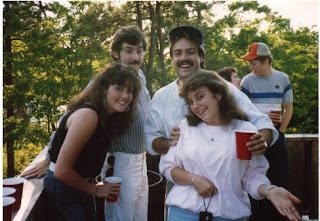 This is one of my pics from the same party, of Paul & me. The one thing I remember the most about this night is Paul and I talking about how crazy he was about one of the news reporters at 58, Nina. He wanted to know if I thought she'd be interested in him and I was all, "go for it dude!". So he did. And they've been married since the late 80's. Man, I look freakin wasted. I know I was wasted b/c I remember that the hangover I had the next day was in my top 5 worse hangovers ever. My friend Jack & I had Red Sox tickets for the next day up in Boston, and neither of us was in any shape to go. I think I woke up at Noon or later. 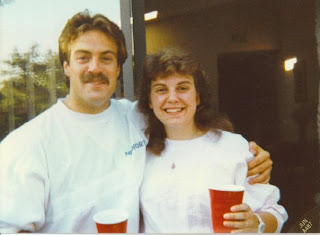