10 Years in the Making

Back in 1999, the United States Mint began printing 5 "State" quarters, per year, in the order that they were admitted to the Union. We were still living in California when it started. At first I wasn't going to cave in to the collection craze, but eventually gave in and bought the map. I also have a book that has room for both the Denver and Philadelphia minted coins. Michelle and I have been trading "P" and "D" mint-marked state quarters since '99. The last state quarters were distributed last year, although I have now seen quarters for places like American Samoa and other minor Southern Pacific territories under US control. But there's no room for those extra quarters on the map. 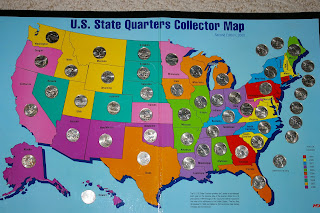 The 13 colonies were the first to be issued. 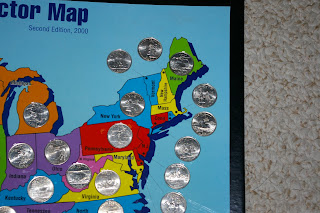 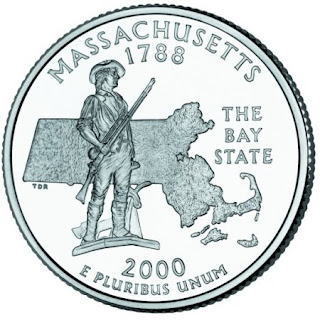 Washington was one of the last to be admitted as a state. The Pacific NW was part of the Louisiana Purchase, and explored by Lewis & Clark. It was eventually called Washington Territory. I heard that the state was almost named Columbia, after the river.
Tons of designs were submitted for our quarter, many by children, and everyone in the state got to vote on their fave design. When the pictures were printed in the newspaper, I found it amazingly adorable how the designs from the children in Western Washington centered on Mt. Rainier, salmon, Space Needle, NW Indian-style orcas and evergreen trees, but the designs from the children in Eastern Washington showed apples, agriculture, the Grand Coulee Dam and salmon. 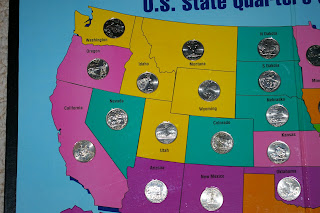 The designs were narrowed to 3 and the one we voted for won. 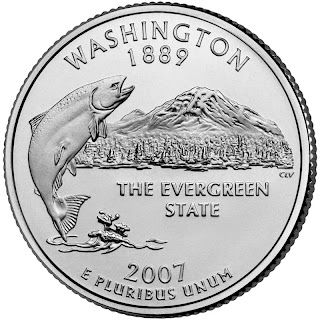