I love stuffed animals. I do. They were my only friends sometimes, when I was growing up, because as I've mentioned before, my part of town was rural and largely childless. I talked to them and they talked to me. They were my "pets" and I love them still, even though they aren't real. But they were very real to me. When the comic strip 'Calvin & Hobbes' came out, my parents told me it reminded them of me, how Calvin's tiger was fully alive to him, but a small stuffed toy when observed from his parents' point of view. It reminded them of me and my fave stuffed horse, Trax. There was one night my mom was rather alarmed, when I was supposed to be sleeping. She heard me in my room laughing my ass off. She called up to me, "Go to sleep!" and I called back, "Sorry, but Trax just told me a really funny joke!" I was probably 7 or 8.
That said, there is one stuffed animal that just Creeps. Me. Out. For my overseas readers, there's a fabric softener called Snuggle. I've never used it....I won't buy it. The ads, which have been running since the late 80's, feature a very scary animatronix or puppet bear, 'Snuggle', romping in the freshly clean laundry, or romping with children in a field of flowers. The way it blinks it's eyes and it's mouth moves is just......just so wrong...and a bit evil. 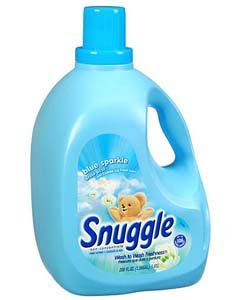 In 1989, when we first moved to San Francisco, I found a Snuggle bear puppet. I thought it'd be a very amusing Christmas gift for Holly, who was equally creeped out by this ad. But because Brian and I have a very, very twisted sense of humour, we had to take some pictures of it.
"Hi, I'm Snuggle, and I could learn to hate you!" 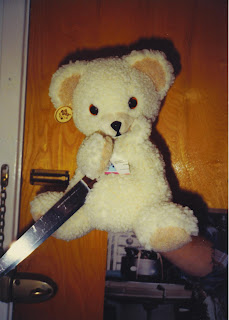 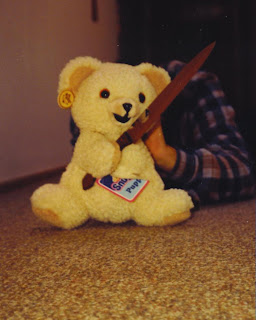