T'was the Night Before Christmas for the 21st Century 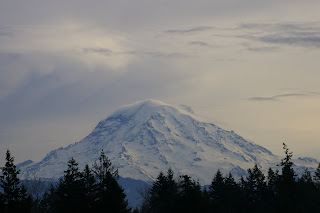 Winter storms in the Southeast Cascades - Sat. December 12, 2009
My friend Laurie Karman Noble, in Vancouver BC, posted this poem on Facebook. She told me she copied it & did some editing. It's perfect for our modern age and my current attitude about the holidays. The incessant and incredibly annoying singing and dancing GAP commercials alone make me want to take hostages...
T’was the night before Christmas, Old Santa was pissed.
He cussed out the elves, and threw down his list.
"Miserable little brats! Ungrateful little jerks!
I have good mind to scrap the whole works.

I’ve busted my ass for damn near a year,
Instead of “Thanks Santa” what do I hear?
The old lady bitches cause I work late at night,
The elves want more money, The reindeer all fight

Rudolph got drunk and goosed all the maids,
Donner is pregnant and Vixen has AIDS.
And just when I thought that things would get better,
Those assholes from IRS sent me a letter!

They say I owe taxes, if that ain’t damn funny,
Who the hell ever sent Santa Claus any money?
And the kids these days, they all are the pits.
They want the impossible, Those mean little shits.
I spent a whole year making wagons and sleds,
Assembling dolls: Their arms, legs and heads.
I made a ton of yo yo’s , No request for them
They want computers and robots…they think I’m IBM!

If you think that’s bad, just picture this,
Try holding those brats, with their pants full of piss!
They pull on my nose, they grab at my beard,
And if I don’t smile, the parents think I’m weird.

Flying through the air, dodging the trees,
Falling down chimneys and skinning my knees.
I’m quitting this job, there’s just no enjoyment
I’ll sit on my fat ass and draw unemployment.
There’s no Christmas this year, now you know the reason
I’m going on vacation for the whole damn season!!!
Posted by JoJo at 12:47 PM