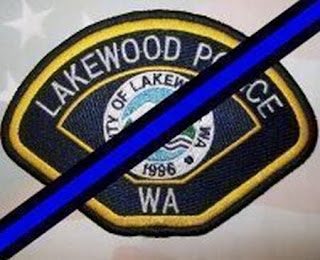 I'm sure everyone has heard about the murder of 4 Lakewood police officers in Parkland, Washington, by a career criminal who was granted a pardon by former Arkansas Gov. and Republican Presidental Candidate, Mike Huckabee. A big fat THANK YOU to Huckabee for unleashing this piece of scum on my state. We are NOT amused. Last night he issued a statement, blaming just about everyone and everything, except himself, for this gross error in judgment. We are still trying to move past the execution of Office Brenton in Seattle on Halloween night, and now 4 more officers are killed while sitting in a coffee shop prior to their shift.
In fact, it's making me really sick the way all of the public agencies here and in Arkansas are saying, "Nope, we followed procedure, not our fault".
Lakewood & Parkland are very close to me. I worked there when we moved here 10 years ago and I still go there to get my photos processed at the camera shop. Although we have a huge population, Pierce County has maintained a small town/community feel. We were on tenterhooks all day yesterday, waiting for the names of the officers to be released, in case we might have known them (we didn't).
I was surprised at how emotional I got yesterday. What a craptastic way to end the Thanksgiving holiday weekend. All I could think about was how they probably had a wonderful holiday with their family and friends, kissed their families yesterday morning and headed off to work.....the families probably went out shopping or started decorating....only to have their lives shattered and forever altered by this piece of human shit.
The suspect, Maurice Clemmons, is still at large, which of course has the entire region gripped in fear. He is wounded, apparently significantly, and bleeding profusely. If he's not dead already, he's in serious pain. There are people that are helping him too, which shocks me. He managed to get from Parkland to Seattle, and slipped away this morning during an 11 hour standoff at a house in which he was said to be hiding. 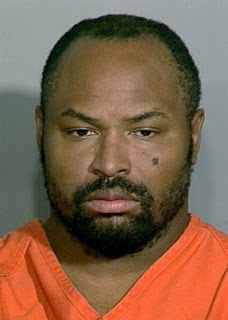 I looked him up on the Pierce County Court website to see what kind of rap sheet he had up here. Because I work in a law firm, we have an account with the Court so that we can view all of the documents filed in any case. Turns out Clemmons was busted in May for breaking and entering and harassment. He had a bench warrant out this summer for failure to appear. He was also busted this summer for rape of a child and assault. During the summer, one of the Judges ordered him to have a psych evaluation at Western State Hospital, but I didn't see where the report or recommendations were filed. I did, however, see that another Judge released him on November 24th on a $150,000 bond. Judges have immunity in situations like this, so they can't be sued. But I am sure that the Judge feels absolutely horrible. If bail had been set higher, or had Clemmons been remanded w/o bail, this never would have happened.
Apparently, in his 5 days of freedom, he managed to take off his electronic monitoring anklet and procure a weapon. He went into the Forza Cafe near McChord AFB yesterday morning where the officers were having coffee and started firing. There was no robbery, just the execution of 4 police officers. It was devastating to hear that one of the officers managed to get to the door of the cafe and struggle, and get off at least 1 shot that (hopefully) wounded Clemmons. The police have been looking for him over 24 hours now and they can't find him. There was an 11 hour standoff at a home in Seattle overnight, but when they finally went inside, no one was there.
The grief is unbelievable. The CEO of the Forza Coffee stores was in tears on the news tonite. Pierce County Sheriff media spokesman, Sheriff Ed Troyer, looks dazed, exhausted and at times, extremely angry & annoyed by the press' stupid questions last night during the press conference. Yesterday, in St. Louis, the Seattle Seahawks head coach, Jim Mora, addressed the reporters after the game and downplayed the badly-needed win in order to make a statement extending the team's concern and sadness for what was happening in Washington. 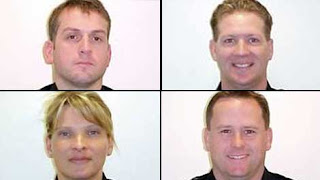 Top left is Sgt. Mark Renninger, age 39. Leaves a wife, 2 daughters and a son.
Top right is Officer Ronald Owens, age 37. Has a daughter.
Bottom left is Officer Tina Griswold, age 40. Leaves a 21 year old daughter, 7 year old son and husband.
Bottom right is Officer Greg Richards, age 42. Leaves a wife & three kids.
I assume that the rest of the world is now talking about America's so-called "gun culture". The bottom line is that criminals will always be able to find weapons, whether or not they are illegal, or even regulated like in Canada. There are shootings in Toronto and Vancouver all the time. Personally I'd like to see the days of the Old West come back where everyone carried a gun. It levels the playing field dramatically. The right to bear arms is in our Constitution and that will never change. Responsible gun owners would never, and have never, done anything like this.
Meanwhile, the County is struggling to come to grips with this horrific, premeditated crime. It's going to take a long time to heal.
2009: WORST YEAR EVER!!!
____
UPDATE!!!
___
The cop killer is DEAD! Shot overnight by a Seattle police officer. However, there are 3 people in custody, accused of providing Clemmons with money, cell phones, rides and weapons, and several others are expected to be arrested. I hope they throw the book at them!!
If anyone is interested in reading Maurice Clemmons' Pierce County Superior Court files, they are being made available to the public at this website: http://www.co.pierce.wa.us/cfapps/linx/Main.cfm Follow the directions at the top of the screen to log into LINX.
Posted by JoJo at 8:12 PM