This is my little guy, Sirius. Isn't he a cutie? The white dots form the Canis Major constellation which includes the star, "Sirius". When I was a kid, I used to watch "The CBS Children's Film Festival", hosted by Kukla Fran & Ollie. There was a film on that show that I saw, about a beautiful GSD named Sirius.

This is Milk Dud's World. That would be the puppy under the otter. These critters are so adorable and I am wicked sucker for "cute overload", so I collected a bunch of them. 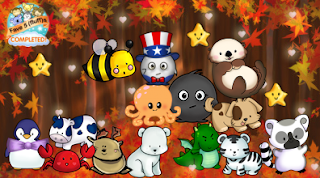