Brian just got the good news today that one of the people he interviewed a few weeks ago on his radio show has an extra ticket to see His Holiness The Dalai Lama in Seattle on Saturday, at Qwest Field. This is a huge event here, and tickets were gone within minutes. This has been a dream of Brian's to see The Dalai Lama speak in person. He came to San Francisco years ago and spoke at Grace Cathedral but we opted not to go because there was a media frenzy due to the fact that Richard Gere would be attending. Although Gere is a devout Buddhist & had brought the Dalai Lama to The City, unfortunately the vast majority of the people who went were there to swoon at Richard Gere. In the early 90's, my dear friend Holly went on a trip to India and met the Dalai Lama in Dharamsala. It changed her life.

Brian has studied Buddhism for many years, but I don't have the personality for it. It just seems like every time I try to do a good deed, or show compassion, it blows up in my face. I've just gotten so cynical and angry. I also can't sit still long enough to meditate and I admit that I am VERY attached to material possessions. But I do have great love and admiration for the Dalai Lama. He is an amazing human being. If only the world could heed his message of peace, love and compassion.

This is a fantastic opportunity for Brian and I'm really pleased for him. Fortunately one of the local TV stations is carrying the event live, so I can DVR it and we can watch it when he gets home. 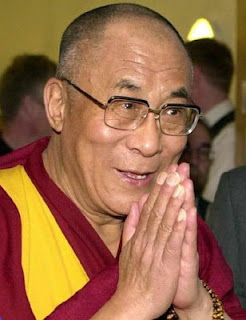 This is one of my favourite scenes, from the classic comedy "Caddyshack":

Carl Spackler (Bill Murray): "So I jump ship in Hong Kong and make my way over to Tibet, and I get on as a looper at a course over in the Himalayas. A looper, you know, a caddy, a looper, a jock. So, I tell them I'm a pro jock, and who do you think they give me? The Dalai Lama, himself. Twelfth son of the Lama. The flowing robes, the grace, bald... striking. So, I'm on the first tee with him. I give him the driver. He hauls off and whacks one - big hitter, the Lama - long, into a ten-thousand foot crevasse, right at the base of this glacier. Do you know what the Lama says? Gunga galunga... gunga, gunga-galunga. So we finish the eighteenth and he's gonna stiff me. And I say, "Hey, Lama, hey, how about a little something, you know, for the effort, you know." And he says, "Oh, uh, there won't be any money, but when you die, on your deathbed, you will receive total consciousness." So I got that goin' for me, which is nice."
Posted by JoJo at 2:43 PM