"She thinks when she was small
There on her father's knee
How he had promised her
You'll always be my baby....." Dave Matthews 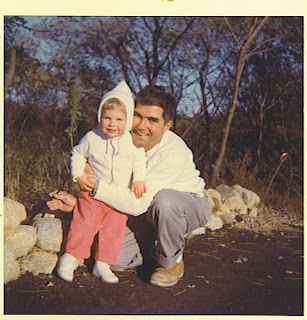 I have so many wonderful memories of my beloved dad. The family gatherings and parties, his memorable solo performances in the annual Minstrel Show, the Red Sox games he took me to in Boston, vacations together, his incredible fondness for fart jokes (just saying,"Hey dad....FART!" to him and he'd bust up laughing), his distinctive laugh, parades he marched in, being out and about in town with him and have him stopped by people everywhere we went, his quiet faith. However, every now and then, a simple, long forgotten memory will make it's way through, usually brought on by hearing a song that he liked or used to sing. This past Saturday, I had one of those memories surface.


My dad was born in 1922 in Georgetown, British Guiana in South America. He, his older sister and younger brother were orphans. Dad left school after the 8th grade and went to work as a cook on freighters that ran between S. America and the USA. He obtained his US citizenship when he was around 19 and immediately joined the US Army and fought in World War II, where he was wounded & received the Purple Heart. Because his last name of "Mendonza" came alphabetically after my Uncle Pete Mendola, Pete befriended this nice boy who had no family, and brought him home to meet his family. My great-grandmother took my dad to her heart immediately. My mom and dad corresponded during the war, mom was only like 16 at the time, and they married in 1947.


My dad had absolutely no role model on how to be a good father. Yet it came sooo natural to him. He was the best daddy a little girl could have. One of my earliest memories from before I went to kindergarten was when I'd see dad's truck pull in at the end of the work day. I'd go hide under the diningroom table or behind a chair and tell mom, "sshh! Don't tell daddy that I'm hiding!". Dad would come in and say, "Where's Joanne?" I'm sure my mom quietly gestured that I was hiding....because then daddy's voice would get louder, "I wonder where Joanne could be? Is she in the desk?" then he'd open the desk. "Is she under here?" and he'd lift up the notepad....but by then my giggles would give me away. He'd stoop down and find me under the table and go, "THERE SHE IS!!" and catch me up in a big hug. Sometimes he'd have brought me a little toy & would have it in his shirt pocket for me to find. But I digress.....


This past Saturday, it was snowing at my house, believe it or not. I'd left work early on Friday and did all my errands, so when I got up on Sat., I didn't have to leave the house. I came downstairs in my jammies, grabbed a colouring book & markers, got under my blanket and settled in. I'd DVR'd a Bugs Bunny 90-minute cartoon/movie so Brian suggested that we watch it, since it was Sat. morning.

Now, for those of you not brought up in the States, or brought up after the 1970's, Bugs Bunny cartoons were the cornerstone of Saturday mornings. We had no Cartoon Network, Nickelodeon or Disney Channels. Cartoons were on NBC, ABC or CBS. Bugs was shown on CBS at 10 am, and always ran 90 minutes. I never missed it. I love the whole Warner Brothers gang - Yosemite Sam, Michigan J. Frog, Taz, Bugs, Daffy, Elmer Fudd, Sylvester & Tweety, Roadrunner & Wile E. Coyote, Gossamer, Marvin the Martian.....etc. Some of my friends' parents thought that Bugs Bunny was too violent. Fortunately, my parents did not view it that way.


Brian and I began watching the Bugs show and we are both in hysterics over the antics. Even though we knew what was coming, we were still laughing; it's just classic stuff. In this particular set of cartoons, Sylvester was really taking his lumps. One after the other, Sylvester's attempts to eat Tweety and/or mice were thwarted. At one point, I glanced up from my colouring book to see the snow falling, then my eyes went to the TV where Sylvester was getting creamed and I was transported back 35 years.


Pick any cold, snowy Saturday morning from November thru March, between 1970 and 1979, and you'd find me on the couch in our livingroom, watching cartoons, under the throw blanket. I'd get up pretty early, grab my shoebox of "treasures", some crayons & paper, my fave stuffed toy horse Trax, and set up shop in the livingroom to watch my shows. Mom always let me do my chores in the afternoon after the cartoons were over.


My dad owned his own business, "John Mendonza Plumbing & Heating", and for awhile, was the only plumber in our town & everyone knew him. He worked 5 days a week, and usually till 1:00 on Saturday. He'd usually pop back in during the day to get more supplies from the barn, have lunch, & ask mom if she needed anything at the store. These were the days before answering machines and he needed my mom to stay home to answer the service calls, which is why she couldn't break away to get to the store if we ran out of bread or milk, so dad would always ask what we needed.


Sometimes if he got home early on Saturday, like at 11, he'd drift into the livingroom to say Hi to me, glance at the TV to see what I was watching, then sit on the little footstool in front of the rocking chair and watch the last half hour of Bugs Bunny with me. He would just roar with laughter every time Wile E. Coyote was smashed by a boulder and they'd make that accordian sound as he walked away all folded up, or whenever Tweety would outsmart Sylvester. He got a serious charge out of it.


So there I was this past Sat., lost in my own memories and trying not to start weeping. When I shut my eyes, I could see the cheery, yellow livingroom at my parent's house, and the green carpet....I could see their old Zenith TV on the TV stand, dad in his grey work pants and shirt, perched on that tiny little footstool, sometimes balancing a plate with his sandwich on his knees, the two of us watching Bugs Bunny cartoons and laughing. I'd always clear off the endtable and a space on the couch and beckon to him to make himself more comfortable & eat at the table, but he always loved sitting on that footstool. Even at family parties when the guests would be occupying the chairs, couch and rockingchair, he'd sit on the footstool.


Dad and I always shared a love for cartoons, and thinking back on that 1970's Saturday morning memory, made me also remember that we'd watch a lot of Yogi Bear, Huckleberry Hound, Trixie Dixie & Minxie, etc. together in the afternoons after school too. I remember one day in junior high, I was up in my room listening to records, but I could hear my dad downstairs maniacally laughing. I went down to see what he was watching and it was Yogi Bear!! In the early 80's, Channel 38 in Boston showed "Night-toons", a half hour block of Bugs Bunny shown at 11 pm on Saturday nights, and dad and I ALWAYS made a "date" to watch "Night-toons" together.


I consider myself a very lucky girl to have had a daddy like mine.
Posted by JoJo at 1:03 PM