I can never remember that saying about the month of March. Is it "in like a lion, out like a lamb" or the other way around?

Anyway, this was the scene at our house a week ago. It kind of took everyone by surprise as we'd been having a run of dry, partly sunny weather for quite awhile. March definitely went out like a lion this year.

The one (and only) nice thing about it being lighter, later, is that for the first time, we were able to enjoy the falling snow for a little while after work. It was very relaxing.

The snow was especially pretty on the pink-blossomed trees. 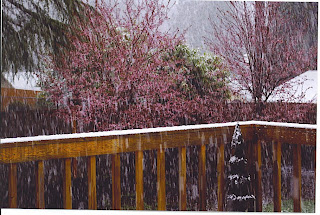 As you can see, it was really coming down. (note: the stained glass thing was my one foray into stained glass. It was a kit.). 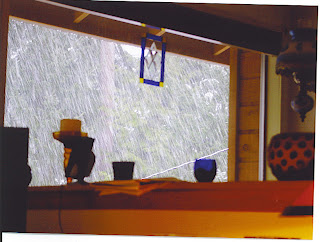 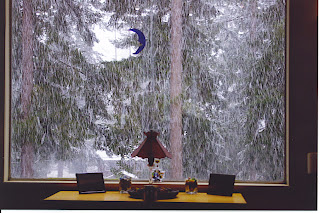 Some of the flakes were as big as your hand. It was a very wet snow, however, so there was a lot of concern about snow laden branches tearing down the lines. 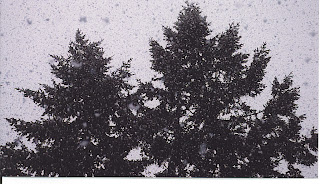 And speaking of lines being torn down, the thinner cable under the large one is for our cable TV. A branch did come down and land on it, but fortunately, it's still connected to the house and the pole on the street, so we continue to have our cable service. But we have to get Comcast to come out and tighten the slack, as it's swooping very low to the ground now. 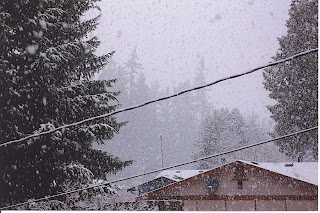 That pink house is sitting empty now and was up for sale. Any Vixens care to move out here and live next door to me????
Posted by JoJo at 6:41 PM