Last weekend when I was at the grocery store, I picked up a couple of new toys for Sagan's birthday. I always get one for Pepper too, so that she doesn't feel left out, and vice versa when it was her birthday. I didn't look at what I was buying, I just picked out soft squeak plush toys because we get a kick out of seeing them running around with the toys in their mouths.
Now that they toys have been laying on my family room floor for the past few days, I've become obsessed with trying to figure out what the hell they are supposed to be. I was going on and on about it this morning when Brian finally said, "My god, give it a rest already! They're just toys!"
But seriously! What the hell are they? Is this a bunny dressed like a lamb? Is it a lamb? Is it a bunny? Is it a bear? Does it have the pox? Is it contagious? 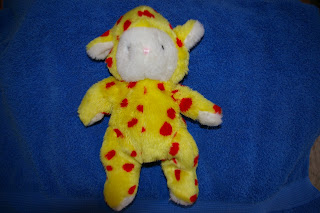 Then we have this poor fellow. It has a lion's head, but no legs. This sad little beastie must drag itself around the jungle by it's front paws. But what's with the tail? I've also never seen a body like that on a lion before. 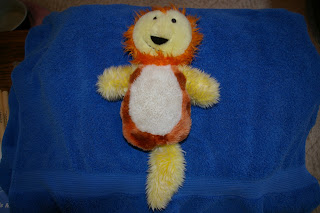 Is it a leopard body with a lion's head? Is it a lion? A leopard? 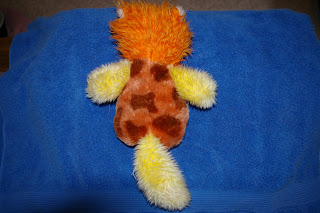