Can someone please tell me where January went? One minute I was enjoying my "pajama vacation" and now the month is over!!

Brian's downstairs watching "The Unforgiven". It's not really my cuppa tea, so I thought I'd write a blog entry. Let's face it, I like my cowboys minty-fresh and these historically accurate period pieces make my stomach churn. I absolutely cannot watch "Deadwood" because of the filth.


I'm still going to the gym a couple of days a week, except for this week because of the snow. I usually try to go on Mondays and Wednesdays, for about 40 minutes. Because I've been doing the thorough cleaning of my house, that substitutes as my weekend workout for now, since I'm up and down the stairs and step ladder, washing walls, pulling furniture out, etc. Once the cleaning is done, I'll increase my gym visits to include a weekend day.


And speaking of cleaning, I'm still meeting those goals as well, and the back room, den, downstairs bathroom, laundry room and hall are sparkling. We had a snow day on Monday so I got those last 3 rooms done. Next, I will work my way upstairs. I can't believe how icky the walls are. I'm saving the worst room for last: the family room. We spend all our time down there, as do Beanie and Teacup, so it's pretty grody.


It didn't snow much on Monday, but it was enough to make early morning driving very treacherous. Usually when it snows at my house, it doesn't snow down below, but this time the snow was at sea level so it was bad all over. When I heard that Hwy. 410 in Bonney Lake was closed b/c of the compact snow and ice, I called work and said "see ya tomorrow". It's the first time since I've lived here that 410 was closed for the weather, although "old timers" tell me that was the case many years ago when it was still just a small 2 lane road. Yeah, I could have gone in to work at lunch b/c everything was melted, but screw it. I-90, one of the main east/west routes through the Cascades, was closed all day Tuesday because crews couldn't keep up with the snow removal and avalanche control. Traffic ground to a halt; trucks were lined up for 3-4 miles waiting for the pass to reopen today, crippling an already fragile local economy. They just get Snoqualmie Pass open today only to have another avalanche come across the roadway, and cover 2 occupied and moving vehicles. Fortunately no one was hurt. So the pass is closed again because they are expecting about 2 FEET of snow, per day, through the weekend. 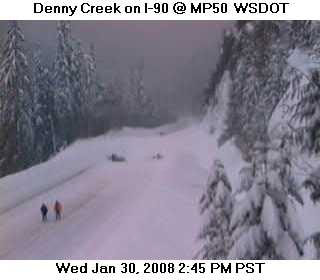 This economy situation has me pretty concerned. I cannot believe the rate of foreclosures on all those bogus loans that were made a few years ago. I read a wicked sad story in the paper tonight that people are just abandoning their homes when they can't pay.....and leaving the family pet behind. Starving animals are found inside the houses or found dumped along the roadsides. People make me sick. How can you do that to an animal? Soulless bastards. At least new building & development has sort of ground to a halt, but not before the damage has been done. Have you noticed how expensive groceries are? I can't get out of Safeway under $100 a week anymore, and we do not buy that much food. But all the staple items like cereal, cheese, bread, butter, peanut butter, etc. are so expensive! The price of meat is insane. No wonder Americans are getting fat. The only thing many people can afford are the 10 boxes of Mac-n-Cheese for $1. Gasoline is fluctuating between $3.19 down to $2.99 a gallon; I heard it could reach $4 by summer, although Brian doesn't think that'll happen in an election year.


I'd like to say thanks to all of you who listened to Brian's show on Sunday, either live or on the archives. As of tonite, he has 1556 archive listeners, which are huge numbers. It was a pretty crazy show! I was proud of him for keeping his cool for as long as he did. I was listening downstairs on the laptop, horrified at the psychotic ramblings of Shirley Phelps Roper. We're talkin', Wack Job City, USA.


Work's been pretty insane, but we're getting by. I'm trying desperately to talk Steve out of having this attorney friend of his come to work in our office. At first, I was kind of on board, like this time last year, when I was terrified I was going to lose my job if we didn't get a second attorney to come into the office when Robyn left. But I've never liked this particular person, despite his being a good friend of my boss. I find him obnoxious, arrogant, inappropriate and abusive. Deb and I have been discussing what a mistake we think this will be, but despite her working for him over 30 years, she can't or won't speak up and tell him how she feels. So, being the big mouth that I am, it's fallen to me to work on Steve every chance I get, telling him to trust me.


He's told me so many times in the past that he'd wished he'd listened to me when I tried to warn him about clients, so I reminded him of that. Then he admits that he's been getting cold feet too and needs to call the guy and tell him no. But Steve hates confrontation. He's the kind of person who will stick his head in the sand, and when things finally do implode, he gets upset and says he should have listened to his gut, his wife, me, Deb, whoever! Well DUH. I told him, never go into business with friends. I told him I have a bad feeling about it and that the guy won't be a good fit. I already don't like the man, I don't respect him and if he does come to work there, I will not take his shit either. I just don't see the point of adding to our collective stress and emotional fragility by bringing this person into our office.


On a positive note, this weekend is the Antique Show at the Puyallup Fairgrounds. I go each winter and I have such a great time looking at all the old stuff. It's like being in a museum without having to pay admission. Sometimes I spend a lot, sometimes I don't. But with 450 vendors in the huge Showplex Building, there's something for everyone. Nice clean restrooms, a snack bar, and sometimes they'll even sell the delicious Fisher Scones, which is something you can usually only get at the Puyallup Fair in the fall. They're predicting snow at sea level possibly, but I don't care. If I have to hitch Beans and Teacup to a sled and mush them down to Puyallup, I will!! I'll be sure to do a blog post when I get back from the show.
Posted by JoJo at 10:18 PM