It's Crissmiss Time in The City

Standing in sharp contrast to the quaint New England holidays I enjoyed growing up, is the holiday season in San Francisco. I was extremely lucky to have found a fantastic job at a law firm in downtown SF, in the historic Monadnock Building at 685 Market Street. Next door was the Sheraton Palace Hotel, also rich in City history. I worked downtown from September, 1990 through February, 1996, when we relocated over to Berkeley.

I shot these pictures in December, 1991. This is the tree in the Palace Hotel. 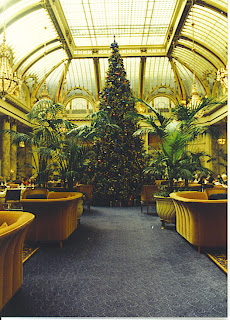 The Santa was peddaling but of course you can't tell that in a still photo. This is a small flower stand in Union Square. 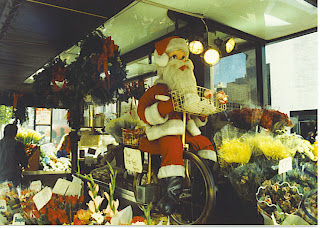 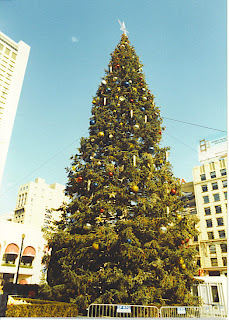 This jaunty fellow was standing guard outside of FAO Schwarz toy store. I love the little teddy bear dressed up like his soldier buddy. 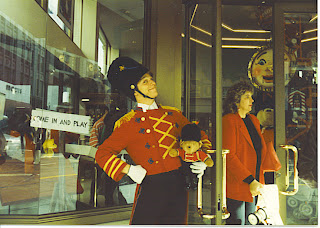 Chevron Plaza at 555 Market Street. This is the headquarters of Chevron Oil and their refinery is in Richmond, in the East Bay. The red trees are all made from poinsettia plants. 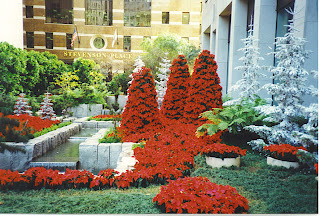 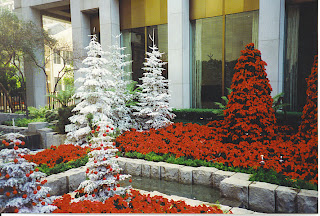 In December, 1996, I was now working in Berkeley. But one night, Brian and I decided to take a drive into The City and go to Skydeck at Embarcadero Center. I think it's on the 45th or 47th floor of Embarcadero 1. In the photo, you can see the smaller 2 & 3 buildings, then the taller one is Embarcadero 4. Below 4, is the Ferry Building and that's the Bay Bridge in the background. Ground level are Embarcadero and Justin Hermann Plazas. 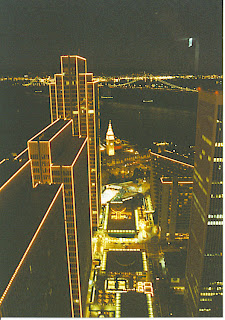 This is my favourite building in the whole world, the TransAmerica Pyramid. The brightly lit major street diagonally on the right is Columbus Avenue, which runs from Fisherman's Wharf through North Beach (the Italian neighborhood) and ends at the Pyramid. 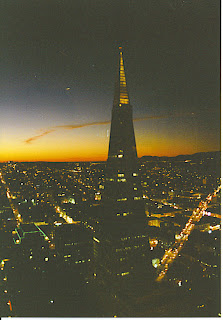 First Interstate Building. Note the tree-shaped lights in the center! 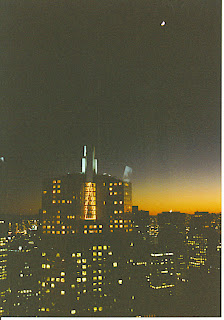