October 17, 2007 marked the 18th year since the Loma Prieta earthquake in the Bay Area. The date is as symbolic to those of us who lived through it as 9/11 is to everyone else. We'll never forget the day, never forget the weather (sunny, still & hot - "earthquake weather"), never forget where we were at 5:04 pm (home watching the World Series between the SF Giants and Oakland A's, Brian was cooking spaghetti & I was painting a design on a denim jacket) and never forget how it changed us. And made us stronger.

We could so easily have run back to the east coast. I am certain that my parents actually thought I would move back. But no way. I was not leaving. I was a San Franciscan now and earthquakes were a part of the package. So we'd only lived there for 2.5 months and Ma Nature decided to show everyone who was boss.

That was a long, long night, lemme tell ya. Pitch black all over the region....you could see the Milky Way. Sirens wailing all night long. The Marina District is on fire, part of the Bay Bridge has collapsed. Aftershocks that rocked us all night and you never knew if it was going to be minor and stop or keep going & get more violent.

Occasionally when we picked up the phone there'd be a dial tone and we'd try to make a call to a friend or family member to let them know we were OK. Remember, the power went out almost immediately, so we never saw what everyone else saw that night, until the next day. We knew it was bad, but we didn't know how bad. On October 18, everyone was told to stay put. They said that we could get powerful aftershocks, up in the 6.0 range, therefore weakened and falling masonry and broken glass was still a hazard, so try to stay inside. We lived a couple of blocks from Golden Gate Park and we couldn't stand being inside anymore, especially if we were going to get another quake, so we walked up to the Park and just sat in a little grassy area for a few hours. We decided that we'd rather ride out a quake outside than in the apartment again.

It's an icky feeling to know that the ground under your feet isn't as rock solid as you think it is. Storms can be predicted for the most part. Quakes can't. You don't know how bad they will be or how long they will last. And when the shaking stops, you realize how grossly unprepared you are for something like that.

To say we suffered major PTSD would be an understatement. I don't want anyone to get the idea that because of our resolve to stay that we weren't completely and totally terrified by what had happened. We were, believe me. One day we had an aftershock while I was standing in the den. I was sick with panic. For many, many weeks, I avoided going in the den and if I had to, I made it a quick trip. As if my going in the den was going to trigger another aftershock. But that's the kind of weird connection your mind makes: Den = terrifying earthquake. Even on the year anniversary, 10/17/90, I was expecting the ground to start shaking again and was relieved when it didn't. Then I realized how silly a thought that was. The odds of it ever happening again on the exact day and time are extremely slim.

One of the lawyers in my office had a client who owned the Calistoga Old Faithful Geyser; her name is Olga Kolbek. The geyser in Calistoga is one of only a few "Old Faithful's" in the country because it goes off at regular intervals. Whenever the geyser would alter it's eruptions, we usually had some kind of seismic activity, even if it was a flurry of microquakes that no one can feel. So Olga would often call our office to warn us that the geyser was now going off every 3 hours, so take necessary precautions. While I appreciated her heads up, that kind of news was enough to set off a wave of panic in our office. EVERYONE would be calling friends, spouses & family to tell them what Olga had said. Next thing you know, it was on the 6:00 news that night. Seriously. Olga would call the news stations to let them know. Then we'd all be on tenterhooks for days. Waiting. I even would go so far as to take all the breakables off the entertainment center and the fireplace and put them on the floor till enough time had passed that it might be safe to put them back up. Or was it? Would I put them back up and then there'd be a quake?

I'm glad we went through it though. It made us stronger, it made us feel like we belonged in San Francisco. That was during Daddy Bush's reign and he didn't come out to see us, just like his son didn't show up in New Orleans a couple of years ago. We got the ultimate booby prize though: Bush sent Dan Quayle to survey the damage about a week after the earthquake. We were like, "Yeah, thanks but no thanks, we can take care of ourselves." And we did. I was proud of my adopted city for rising to the occasion. Everyone reached out to everyone. I heard that homeless people were out in the streets downtown directing traffic.....and doing a bang up job of it too. 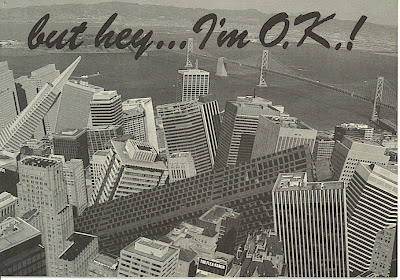